Off Off Broadway, New Play with Music
Runs through 5.19.12
Dixon Place, 161A Chrystie Street 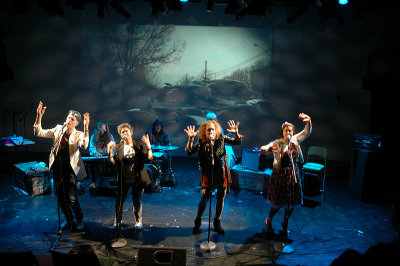 BOTTOM LINE: Light on the story line, but heavy on quirky musical numbers, this shows amounts to a humorous rock concert.

In this day and age youth seems to be a required commodity for album sales; even pop stars in their late twenties pretend to be younger for fear of losing market value. With each crop of youthful singers pushing out the aged, the media seems to constantly remind us that music is an art form for the young. The Talking Band’s new production, The Peripherals, proves that rock knows no age, featuring a band with two front people one might expect to see hitting up blue plate specials rather than belting out an impassioned rock number.

The play begins with an extended opening scene. Accompanied by staticky top-40 radio, the band sets up their instruments and equipment while making mumbled banter. The audience’s attention floats in and out during the first few minutes, unsure as to whether the play has officially begun. The arrival of Phyllis (Kamala Sankaram) marks the first fully fleshed out dialogue, as she explains that she’s a substitute for a regular member who had her face slashed by “a guy.” (Phyllis nonetheless seems to know every step of the band’s choreographed numbers.)

Shortly after the arrival of front woman Suzy Q (Ellen Maddow) the band jumps into their first musical number, accompanied by correlating video. The band’s songs are eccentrically wonderful rock gems that bring to mind the work of the B52s. While most pop music today centers around little else than trite ruminations on heartbreak and sexual desire, the band casts aside common themes, opting instead to create choreographed numbers on such unusual topics as the mystery of a flock of birds dropping dead over Staten Island, losing one’s keys, a favorite renegade vegetable-cooking aunt, and the importance of moving carefully so to avoid trampling one another. (Fittingly, The Talking Band’s website describes their mission as “Illuminating the extraordinary dimensions of ordinary life.”) The band also performs a prolonged, humorous number meant to mimic the overpacked streets of Manhattan.

Storyline-wise, however, there isn’t much here. The show hints at a deep bond between Sluice (Paul Zimet) and Suzy Q, and Phyllis reveals that despite her girly girl outfit and cutesy voice, she has a double life as the lead singer of a punk band. However little else happens in lieu of plot.

Nonetheless, The Peripherals is charming and humorous. Ellen Maddow, who also wrote the script and song lyrics, has a knack for quirky and layered rock numbers. Her impassioned vocals prove that there is no age limit on rocking out. Actress Kamala Sankaram steals much of the show as the chameleon Phyllis while Sam Kulik shows a knack for physical comedy as Fizz, the keyboardist. The eccentric charm of this unlikely group makes one wish that they were an actual band and not just theatrical fiction.