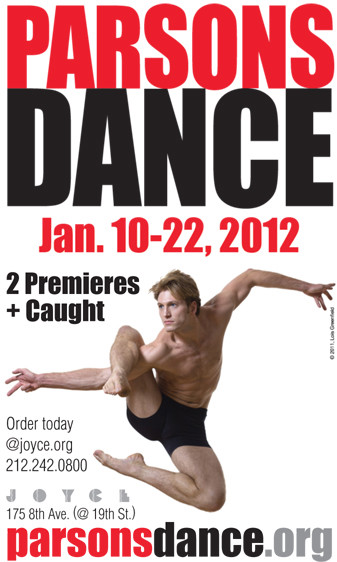 Parsons Dance is back at the Joyce Theatre with two world premiere works and several favorites from the Parsons repertoire—bringing all the hope, romance, and fun that makes David Parsons' movement such a joy to watch.

Premiering this year are Round My World, choreographed by David Parsons to music created by cellist Zoe Keating, and A Stray’s Lullaby choreographed by Katarzyna Sharpetowksa with composer Kenji Bunch. Additional Parsons choreographic works being performed include Swing Shift with music by Kenji Bunch, a duet excerpt from Step Into My Dream to music by Dr. Billy Taylor, and the “stroboscopic masterwork” Caught. The company includes the striking and sportive Eric Bourne, Sarah Braverman, Steven Vaughn, Melissa Ullom, Christina Ilisije, Jason MacDonald, Ian Spring, Elena D’Amario, and apprentice Christopher Bloom.

Parsons is also presenting a kid-friendly “Family Matinee” on Saturday, January 14th at 2 PM which will feature Envelope, Hand Dance, an excerpt from Step Into My Dream, Slow Dance, Caught, and Swing Shift.

The night I attended started with Round My World, possibly my favorite piece to date by David Parsons. Set to “ribbons of sound” by Zoe Keating, the piece uses six dancers and circular themes including shapes and pathways to create something that feels very communal while maintaining intricacies and detail. Round My World is simple and lovely but with complex pathways and group formations. The movement involves dynamic reflections of both primitive styles and highly refined dance. Mostly this piece reminds me how beautiful bodies are, and how riveting movement can be, particularly in relation to other bodies moving. It’s breathtaking.

Also premiering is the Joyce-commissioned A Stray’s Lullaby created through a collaboration between choreographer Sharpetowska and composer Bunch. It is the most theatrical of the works presented, featuring costumes nodding to the early 20th century. The perspective seems younger than the Parsons pieces—more brash and hungry, sometimes haphazard, with a soundscape that is jarring but intricate. The highlight is a solo by Christina Ilisije that demonstrates her incredible control and articulation. A Stray’s Lullaby is direct and angry in a way that could be overwhelming, but that is what makes the work dramatic and powerful.

The selection from Step into My Dream features the charismatic duo Eric Bourne and Sarah Braverman, who maintain an almost vaudevillian chemistry with an added 50s lounge-ish charm about the music and fun pajama-inspired costumes. Swing Shift is filled with partner work both fancy and fanciful and a genius match cut style transition from one solo to another. With its stereotypical “contemporary dance” costumes and lighting, I have to admit I felt the least connected to this performance, but still enjoyed it. And of course Caught was once again included, a mesmerizing piece using strobe lighting and feats of athleticism performed by Eric Bourne. Even though I remember the tech being tighter for this piece last year, this work is a still a phenomenon and crowd favorite. It’s a thrill to see!

David Parsons is an internationally-renowned contemporary dance company dating back 25 years, and their record of excellence and creating enjoyable works is met and surpassed with their 2012 run at the Joyce. Headlined by the premiere of the delicious new Round My World, and featuring a deeply talented company of charismatic, skilled dancers, this show is a must-see for dance lovers and an audience-friendly introduction for neophytes.