By Michael Bradford; Directed by May Adrales 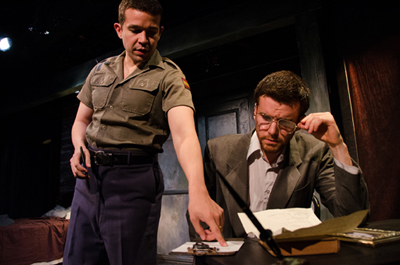 Rey Lucas and Armando Riesco in OLIVES AND BLOOD. Photo by Ric Sechrest

BOTTOM LINE: Worth it. Some parts are wonky, and it could do with a bit of cutting, but its a luminescent piece of writing.

NOTE: Due to personal circumstances, I am late getting this review out, and more's the pity. In the interests of cutting straight to the point, I'm giving you a snapshot of how I feel about the show.

Olives and Blood is a magic realist look of the death of Frederico Garcia Lorca, the famous Spanish playwright and poet who, according to the play, was killed by a young fascist named Juan Luis Trescante Medina (I don't know how much of this is based in fact, but it isn't important). The play, spoken mostly from the perspective of Medina at different points in his life, has much less to do with Lorca himself and much more to do with the realities of power and control. As put by a supporting character towards the end of the play, "'There is the law, and then there is what happens." There could not be truer words for the human condition, and this is where the play really shines; it's not the historical minutia of Lorca's death, it's more about the basic elements of a human life, the stories we tell ourselves, the stories we tell to others, that the reality of a situation is usually dependent on the storyteller. Where are the absolute rights and wrongs? Do any such things really exist? Or is just that there's the law, and then there's what happens? Delicious conundrum, beautifully and subtly explored.

It's hard to follow the show in a linear fashion anyway, as it jumps back and forth and changes focus multiple times. Is it Lorca's story, or is it Medina's story? I couldn't really tell you. Also: not important. This is a play about words, about truth, about the things we say to each other and the things we say to ourselves. The duende, as Lorca would say: the search for the ultimate truth. He based his entire artistic life on searching for the duende, an elusive and somewhat frustrating goal, I would imagine. But the play does his work enormous justice, and pays homage and tribute to an astounding artist and writer at the same time it explores the same themes Lorca himself did in his own work.

It isn't a completely even production. Act One is a bit wonkier than Act Two, and the performances are uneven, some superlative, some less so. Direction is bizarro (industry term) here and there, and its almost unconscionable how many bit players come on and off stage. I think the play could do with trimming, but there are honest to goodness moments of true artistic magic, where I was so wrapped up in the language that I forgot where I was and what I was doing. That is always worth the price of admission.

The show is only running through Sunday. Go see it. And remember, there is the law, and then there is what happens.