By Susan Blackwell and Hunter Bell; Music and Lyrics by Jeff Bowen
Directed by Michael Berresse 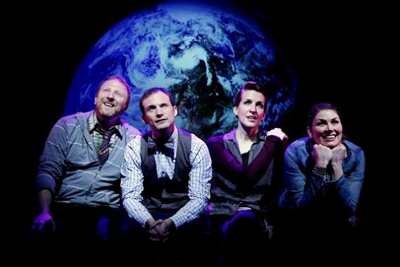 BOTTOM LINE: Another meta-musical from the [title of show] folks, about a headier subject than musical theatre: the meaning of life.

Endearing is putting it lightly. There is something magnetic, sympathetic, and downright engaging about Jeff Bowen, Hunter Bell, Susan Blackwell and Heidi Blickenstaff, the foursome who comprise the NOW.HERE.THIS. cast. Just as they did in their 2006 musical [title of show], these four performers play themselves, and the show involves direct address with anecdotal recollections (presumably factual) from each of their lives. Anyone familiar with [title of show] will already recognize this sensibility, in which four very cool individuals share with you, the audience, the personal aspects of their lives including aspirations, regrets and hopes.

[title of show] was framed by its self-referential goal of producing a musical. NOW.HERE.THIS. is framed by a trip to the museum to research life’s origins. Based on the theory of Trappist monk Thomas Merton, the “now-here-this” refers to an ideal way to live life: now (time), here (place), this (whatever you happen to be doing). When the “now-here-this” is in balance, you can reach a higher plane of consciousness and live life to its fullest. Jeff, Hunter, Susan and Heidi pursue a greater understanding of life’s mysteries at the Museum of Natural History, and the dramatic development of the musical shows them traveling from exhibit to exhibit and reflecting on moments from their past along the way.

From this structure, we are able to see the four as naïve children, awkward teens, and ambitious adults. Throughout the show, memories are played out and personal anecdotes are exposed. The result is a deeper understanding of the characters and the moments that have shaped their growth so far. Differing greatly in tone, these recollections take us through moments sad, happy, awkward, etc. Those not familiar with [title of show] might be at a disadvantage when it comes to actually caring about Jeff, Hunter, Susan and Heidi, but they are soon able to charm the audience into following their journey.

Tightly directed and choreographed by Michael Berresse, with musical direction by Larry Pressgrove, the foursome reunites with their creative collaborators from [title of show] in what is clearly an ensemble spirit. Written by Hunter and Susan, with music and lyrics by Jeff, NOW.HERE.THIS. is a labor of love meant to be shared with an audience. The experience is inspirational, as the conclusion results in a reminder that life’s little moments -- no matter how unimpressive at the time -- can have more definitive meaning than any long-term goal.

A reminder to live in the present and enjoy life as it happens is always a welcomed sentiment. Jeff, Hunter, Susan, and Heidi project an almost life-coach-like quality as they find joy within everyday experiences. As a self-standing piece of theatre, I’m not sure NOW.HERE.THIS. is quite dense enough to effectively convey its point -- it really dwells very little on Merton and the show’s overarching concept, and the museum through-line gets a little too static -- but a witty script and enjoyable score performed by four consummate talents is satisfying, regardless. It’s the charm of the performers that sucks you into the tale they’re telling.