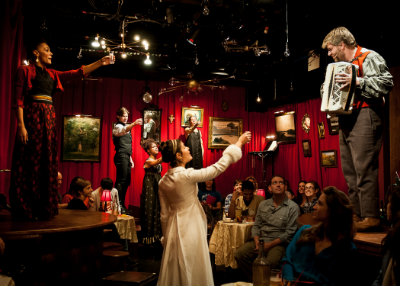 Have you been meaning to pick up some Tolstoy, but prevented yourself out of concern about there being too many words and not enough sarcasm, sass, and above all, a disheartening lack of musical numbers? Well despair no more! Playing now through November 10th at Ars Nova, Dave Malloy offers you Natasha, Pierre & the Great Comet of 1812, the musical adaptation of a juicy portion of War & Peace. And, in addition to adding 16 performers and 21 instruments to bring the piece to life, Malloy has added heavy doses of meta-theatricality and copious vodka into the mix, to satisfying effect.

Young and sweetly naïve Natasha comes to stay with her godmother, Marya, in Moscow as she waits out her fiancée’s military engagement. And here the trouble begins. Young and fresh as she is, and recently come from the country, Natasha cannot help herself to avoid male attention. Attracting a certain man with anything but a snow-white reputation, Natasha finds herself in the throes of her first encounter with lust and desire, prompting her to try to rid herself of the once well laid but perhaps less pulse-quickening life plans. This subset of Moscow aristocracy swirls around Natasha, both helping and hoping to harm her, as she plucks her way through her first romantic foibles, hyper-articulately singing all the while.

Though certainly the Russian classic has been poked, prodded, and somewhat taken the piss at in the process of jamming it into a genre-gamut-running pop-musical fiesta, Malloy’s devotion and respect for the original text is apparent. It should please lovers of the style that he ardently sticks to the epic novel rule of thumb: why use one word when you can use eleven. Oscillating between highly meta, overwhelmingly genuine and all the pinpoints of emotional reflectiveness that fit in-between, Malloy’s music ranges from folky to pop-y to indie (quite aside from the unneccessary and overly strobe-heavy dance break), and by and large rings truer than previous pop musicals of late (the obvious comparison here being Bloody, Bloody Andrew Jackson).

But above and beyond the cheeky and clever libretto, the talented and diverse cast heightens the material, and the range of vocal talents showcased in the small cabaret-like space is duly impressive. Befitting the variety of musical styles in Malloy’s music, the cast boasts all manner of voices to please all manner of audiences. Whether they be looking for an Ingrid Michaelson-type or more traditionally vivacious stage-lungs, they shall find it here. And through it all, the appropriately young and wide-eyed Phillipa Soo, playing the titular ingénue, upholds most dutifully the lions-share of the evening’s drama.

Indeed, all in all, it is the range proffered throughout that makes the evening so enjoyable. A sizeable affair at two and a half hours, the time passes as it does thanks to the ongoing shift in tune and type. The transformed Ars Nova playing space works more as a canvas than anything else, with few costumes changes and no set changes at all, the beautiful and terrifically practical lighting highlights areas anew, ably changing the scene as much as the songs do.

Although little touches here and there pull away from the theatrical world created (such as the strangely decorated entrance pasted with contemporary Soviet and Cyrillic signage), Natasha, Pierre & the Great Comet of 1812 is well worth the price of admission and trek over to 54th and 10th. And maybe, just maybe, it will inspire a little more Tolstoy consumption on the subways through the long, cold winter to come.