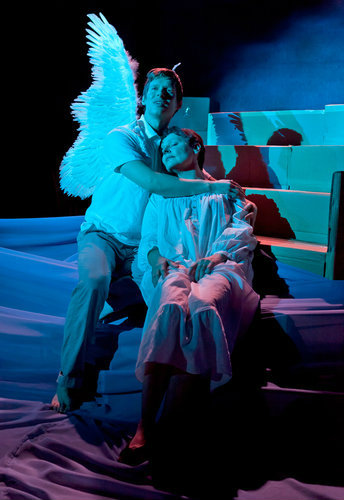 Adam Guettel's song cycle Myths & Hymns is undoubtedly one of the most challenging works from the prolific composer/lyricist. Challenging for the singers, challenging for the director, and (where this work finds its biggest complication) challenging for the audience. I am pleased to report that The Prospect Theater Company's reconception of one of Guettel's early works thwarts every challenge with skill and originality in a highly visceral, and dare I say it...moving production.

Originally titled Saturn Returns in 1998 when it premiered at Joe's Pub, this marks the first return of Guettel's song cycle to New York City in almost fifteen years, and much has changed besides the name. While the title change also occurred in 1998 when the album was recorded, nearly every other alteration in this 2012 production can be attributed to the production's fine director, Elizabeth Lucas. Some of these changes include a new order of the songs, women singing songs originally sung by men, an additional cast member, and most notably: a narrative plot.

Lucas' reimagining takes place in the box-strewn attic (resembling a lighthouse) of a young woman who is caring for her elderly mother. In an act of child-like regression the mother locks herself in to rifle among the memories and memorabilia boxed up in her daughter’s attic. The objects tucked away recall the memories of her husband, daughter, and son whose familial relationship at one time was loving, but became frayed over the years. Told chronologically, the story begins with the first meeting with her husband and weaves through the lives of their children as they grapple with issues of abortion and homosexuality (to name a few), aggravating the delicate structure of their Christian household.

Lucas is telling a story that gracefully flows through the emotional peaks and valleys of the character’s lives -- while the actors simultaneously navigate the vocal highs and lows in Guettel’s mountain of a score. The complex music comes to life on stage; for when it bypasses melody, it guides the listener through the song’s emotional journey, and in turn gives the listener a piece of the glory from that experience. The singers all deserve a major round of applause, for to be assigned this score is undoubtedly a blessing and a curse (have I mentioned how challenging the music is yet?). Watching the cast perform provides excitement in itself, and each actor/singer has a shinning moment.

Bob Stillman, an original cast member from the ’98 production returns to this piece sounding as if not a day has passed. Stillman sets the bar high in the beginning of the show with a beautifully sung and deceptively simple “Hero and Leander.” Anika Larsen’s portrayal of the Daughter is finely articulated: shaped by her loss, Larsen creates an empathetic portrait that is likely to put spectators in touch with their maternal instincts and want to reassure her that everything will be alright. As her brother, Lucas Steele is a whimsical embodiment of Peter Pan-like youth and innocence; and Linda Balgord’s observing mother is a testament to the fact that it is not the amount of lines or songs that define a great performance. Balgord spends most of the show in silence as she watches the past relive itself, until she powerfully and desperately sings “Awaiting You” bringing round one of the most cathartic moments in the show. In the ensemble roles, Donell James Foreman brings a burst of soulful energy to the stage in “There’s a Shout” and Matthew Farcher’s “There’s a Land” is one of the vocal high points of the production. Ally Bonino also delivers an impressive performance by all accounts, although her role, entitled the Trickster, seems to be the show’s only superfluous element.

The production itself employs some of the most creative and imaginative staging since last year’s triumphant Peter and the Starcatchers which debuted at the New York Theatre Workshop and is coming to Broadway this season. The wistful set and the opulent lighting (by Ann Bartek and Herrick Goldman respectively) heighten the fantasy and otherworldliness of the stories that are both of our time and lost in time. The pervasive oceanic quality in Lucas’s vision coupled with the pseudo-lighthouse setting evokes the Greek and Roman mythological fabric that is the underpinning of this work. The lighthouse (first invented by the ancient Greeks), is representative of the mother who is harboring her family’s past and waiting to sail away from her earthly plane.

This inventive retelling of Myths & Hymns transforms the grandeur of Guettel’s mythological concept into the smaller lives of relatable twenty-first century characters. The show’s greatest success is in depicting how we mythologize our human existence, but great loss and deep understanding come about in the form of a hymn, bringing forth clarity and solemnity. Translation goes hand in hand with mythology and theology as stories of Icarus, Saturn, and even Christ have undergone countless translations throughout time. Lucas creates but another translation; perhaps not the penultimate version of Myths & Hymns, but one that is told with artistry, and suggests the endless possibilities of Mr. Guettel’s work.

(Myths & Hymns is produced by The Prospect Theater Company, and plays at The West End Theatre in the Church of St. Paul and St. Andrew, 263 West 86th Street, between Broadway and West End Avenue, through February 26, 2012. Performances are Tuesdays and Wednesdays at 7:30PM; Thursdays at Fridays at 8:30PM; Saturdays and Sundays at 3PM. There is also a 3PM matinee on February 16th and an 8PM performance on February 11th. Tickets range from $50 - $65 and can be purchased at prospecttheater.org or by calling 212.352.3101.)