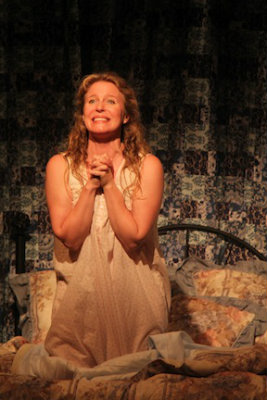 BOTTOM LINE: An unusual script combined with a talented director and cast makes this an immensely funny comedy, with a deeper examination of human nature.

A violent elephant in therapy after killing a woman, a 31 year-old Sunday school teacher desperate for sexual fulfillment, a promiscuous young woman facing the contraction of HPV as consequence for her actions, and a father and son coping with the death of their wife/mother; these seemingly disparate storylines running through Miss Lilly Gets Boned seem unrelated at first but eventually add up to a larger rumination on violence, human nature, and control. While at face value this comedy packs plenty of laughs and silly scenes, it also adds up to a greater reflection on humanity.

The play’s title character, Miss Lilly (Jessica Dickey), is a cheery Sunday school teacher who helps children understand the mysteries of the bible and defends its less believable parables to confused minds. As a devoted Christian she is still a virgin, never having even been on a date, as she waits patiently for God to send her her perfect soulmate even if it means battling loneliness and sexual frustration. Her foil is her sister Lara (Liz Wisan), who has decided that instead of waiting for her prince to come she will settle for what sexual fulfillment life throws her way, even if it means sleeping with questionable men. She credits her most recent hookups with a younger college-age man in numerous bathrooms as being the reason for her recent contraction of HPV. Many of the play’s most humorous moments come from the two exchanging quips on their sexual views as Dickey and Wisan’s admirable skills as comedic actresses enable them to milk every possible laugh from Brunstetter’s script. (Lara defends her sexual behavior with such logic as, “I’m not a slut, I can play the piano.”)

Lilly’s lonely desperation is given possible reprieve with the arrival of the slightly dorky yet dapper South African Richard (Chris Thorn), whose son is in her Sunday school class. Lilly prays to God for permission to sample the pleasure of Richard’s flesh, begging him to throw her “a bone.” A giant elephant femur bone magically flies into her bedroom as means of a reply.

Brunstetter somehow manages to merge, absurdist, cartoonish humor with realism in her script. She also adds depth to the dialogue that enable the characters to be more than just one-sided caricatures. Their struggles and desires ring true, and this makes the absurd events that unfold in the play seem realistic. Director David F. Chapman, along with the obviously gifted cast, successfully merge the tones of comedy and drama into the work, creating characters that are ridiculously over the top yet also who have struggles that resonate in our daily lives.

(Miss Lilly Gets Boned ended its run in the Ice Factory Festival on July 21, 2012. The Ice Factory Festival runs through August 2nd at the Ohio Theatre at 154 Christopher Street. The remaining shows include The Apocalyptic Road Show With Your Hosts Gdjet And Lulu and The Girl of the Golden West. Tickets are $12-$18 and are available at www.smarttix.com or by calling 212.868.4444.)