Written and Performed by Steven Strafford; Directed by Adam Fitzgerald 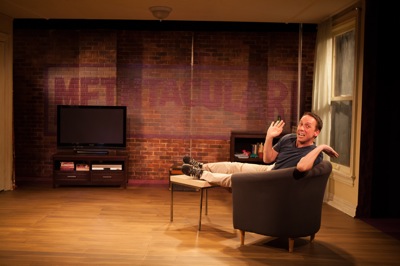 BOTTOM LINE: Methtacular! is skillfully directed by Adam Fitzgerald and features a refreshingly honest and courageous performance from Steven Strafford.

While Strafford is the only person inhabiting the stage at the Playroom Theatre, it's inspiring to go through the program and learn just how many other talented artists made this show possible. John McDaniel’s music supervision and arrangements make scene changes a breeze. David L. Arsenault’s scenic design is fun and chic with every inch of the small space is used to its fullest potential. Travis McHale’s lighting design amplifies a drug addict’s complete darkness plus undeniable bliss; powerfully, the lights are brightest when Strafford is about to or has just taken a hit.

Strafford puts light-hearted humor and painfully dark drama into a blender and the result is a sincere and heartfelt performance. When he discusses doing meth for the first time, he's deep and vulnerable. He also shines when he goes big, like when he’s a game show host asking two members of the audience what they’d do if they heard voices from the toaster. (“Um, unplug the toaster?” one girl says, receiving quite the applause from the audience.)

Besides getting Strafford’s perspective of being addicted to a lifestyle consisting merely of drugs and sex, we see real footage of his mother interviewed about the whole ordeal. This addition provides the most fascinating insight of the night, whether it’s laugh-out-loud funny (“It’s really sad when you can’t tell the difference between your kids,” she says as she goes through a family album) or hauntingly effective (“…he said he was okay…” she muses and then stares).

At times, Strafford delivers a performance too sharp, too structured, too musical-theatre for its own good. He swiftly goes from chipper to depressed but I wanted to see this emotional journey more like a bumpy roller-coaster. I also would have liked to see his interpretation of characters like his numerous ex-boyfriends or his mother, as opposed to his announcing “He said”/“She said.” What we have now is ninety minutes of Steven as Steven -- a great storytelling display, but one that lacks versatility acting-wise.

While there are some unnecessary aspects to the production (namely, text on the wall that acts as scene titles but ultimately adds nothing) and there’s a script that falls short one moment (“He was not homeless, but less than homed”) then soars the next (“Lifetime: TV for Gay Crack Heads Coming Down”), there is no denying the impact that Strafford left on his audience as he proudly exclaims one of his closing lines: “There’s nothing wrong with me.” He not only sings it, but he means it. And that’s precisely what makes this a show worth seeing. Strafford invites us to a place that’s sometimes dark and painful, but presents the material in an accessible, earnest manner.

(Methtacular! plays at The Playroom Theater, 151 West 46th Street, 8th Floor, through September 23, 2012. Performances are Thursdays through Saturdays at 8PM and Sundays at 5PM. Tickets are $18 and are available at ovationtix.com.)