The Last Days of Judas Iscariot 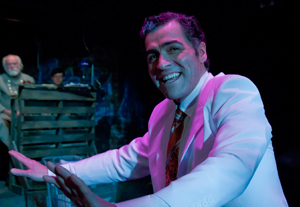 Eliud Kauffman as Yusuf El-Fayoumy in THE LAST DAYS OF JUDAS ISCARIOT. Photo by Daniel Terna.

BOTTOM LINE: With a host of fascinating characters including Satan, Pontius Pilate, Sigmund Freud and Mother Teresa, this irreverent trash-talking riff on the philosophical and
theological questions surrounding Judas’ betrayal of Jesus can be enjoyed by both religious believers and non-believers alike.

Indeed, why should man be held morally accountable for any of his actions anyway? If God is omniscient, He knows everything that man will do and if He’s omnipotent he certainly could have created man in a manner which would not have led him to do the most abhorrent things of which he has proved himself capable. But since God created man as what he is, isn’t it really God, Himself, not man, who must bear the moral responsibility for man’s actions? There just doesn’t seem to be any room for man to have Free Will, if God knows everything that’s going to happen even before it occurs, and if it was God who was responsible for having created all the agents who brought everything about in the first place.

So we’re left with an incoherent mix of purported Godly attributes, at least one of which is simply inconsistent with the other two. And we are left with a purely deterministic or fatalistic world evolving strictly in accordance with God’s own plan, in which it makes no rational sense to hold any man morally responsible for his actions.

Which brings us to the play at hand.

Guirgis has conjured up a place called Hope in downtown Purgatory, midway between Heaven and Hell, where the souls of the departed who are ultimately destined to wind up “above” or “below” may appeal their fates. And on this day, it is Fabiana Aziza Cunningham (Adyana de la Torre), the feisty agnostic defense attorney representing Judas Iscariot (Steven Carrieri), who is there to plead her client’s case before Judge Littlefield (Bud Stafford). Judas is in something of a catatonic state, uninvolved in his own defense, and simply awaiting transference from Purgatory to Hell. But if, in fact, the crucifixion of Jesus was part and parcel of God’s plan to save Mankind, why should Judas be punished for the role he played in betraying Jesus to the authorities who crucified Him? At worst, shouldn’t one say that Judas, lacking Free Will, simply played out the predetermined role that God scripted for him and we certainly can’t hold him morally responsible for that? And if, despite the logical inconsistency it would seem to entail given our theological presuppositions, we still choose to attribute Free Will to Judas, shouldn’t we revere him for assisting Jesus in fulfilling His plan, rather than condemning him for it? And if Judas were to be held morally responsible for betraying Jesus, and if such behavior were deemed contemptible notwithstanding its leading to the fulfillment of God’s plan, why shouldn’t an all-merciful God forgive him anyway?

Moving right along, is it really Judas who should be held most responsible for Jesus’ crucifixion? True, enough, he betrayed Him but did he know that that necessarily would lead to Jesus’ death? Wasn’t Caiaphas the Elder (Ben Prayz), the leader of the Sanhedrin who turned Jesus over to the Romans even more culpable than Judas? Or is that anti-Semitism rearing its ugly head? And wasn’t Pontius Pilate (Omar Bustamante), the Roman judge who meted out the crucifixion sentence and yet who went on to be recognized as a saint by the Ethiopian Orthodox Tewahedo Church in the Sixth Century the most culpable of all?

Cunningham is a fierce advocate but she may have met her match in her adversary, the pandering prosecutor Yusef El-Fayoumy (Eliud Kauffman), who comes closest to stealing the show. Between them, Cunningham and El-Fayoumy call upon an exceptional array of witnesses including, in addition to Caiaphus the Elder and Pontius Pilate, such strange bedfellows as Sigmund Freud (Alex Crow Riemers), Mother Teresa (Julia Kelly) and Satan (Stephen Alan Wilson) as well as several of Christ’s Apostles including Peter (Tommy Buck),Thomas (George Mouriadis), Simon (Brennan Vickery), and Mary Magdalene (Rebecca Spiro).

Along the way we also meet the angel Gloria (Morgan McGuire); the self-described nagging Saint Monica (Erica Lauren McLaughlin); Judas’ mother Henrietta (Julie Szabo); Butch Honeywell, the foreman of Judas’ jury (Benjamin Jones); the court’s Bailiff (Michael J. Connelly); and, of course, Jesus of Nazareth, Himself (Alexandra Turshen). They all have important roles to play and they play them very well, but the evanescent McGuire and trash-talking McLaughlin turn in the very best performances

If this play were nothing more than an intelligently structured philosophical and theological think piece, that still might be enough for some theatre-goers -- but not necessarily for all. Fortunately, however, it is much more than that. Guirgis has written his play in as street smart, trash talking, politically incorrect and irreverent a manner as one might imagine but, at the same time, he has created a work that resonates with a belief in God’s forgiveness and mercy and man’s ultimate redemption. To be sure, there may be some whose ultra-orthodox or very traditional religious convictions may cause them to take umbrage at some of the play’s earthy language but I’d suspect that most people -- and that would include both non-believers and believers with more modern religious sentiments alike -- will find this play to be not only provocative but great fun.

(The Last Days of Judas Iscariot plays through April 8th, 2012 at the Gloria Maddox Theatre, 151 West 26th Street, between Sixth and Seventh Avenues, Seventh Floor. Performances are Wednesdays through Saturdays at 8PM; Saturdays at 2PM; and Sundays at 3PM. Tickets are $20 and can be purchased at www.tschreiber.org or by calling 866.811.4111.)