Love in the Time of Chlamydia

By Nicole Pandolfo; Directed by Jonathan Warman
Part of the 2012 Frigid Festival 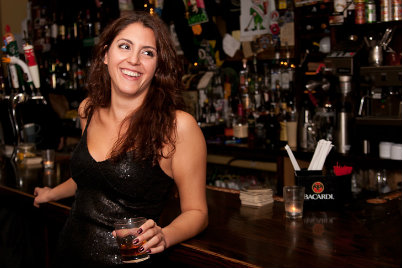 Nicole Pandolfo in LOVE IN THE TIME OF CHLAMYDIA. Photo by Hunter Canning.

BOTTOM LINE: Nicole Pandolfo’s skill as a performer and her likable stage presence makes this story of dating catastrophes immensely funny and engaging.

Nicole Pandolfo opens her one woman show, Love in the Time of Chlamydia, with the story of how she lost her virginity at the age of 15 to her high school boyfriend. While his parents are away her boyfriend proposes they have sex in his parents’ bed and that Pandolfo don both his mother’s negligee and perfume. After this brief and predictably lackluster event is finished, Pandolfo gazes at the ceiling wondering if this is a sign of just what life has in store for her. It does, in fact, become the beginning of a pattern of bedding, and sometimes dating, jerks and nutcases throughout her adulthood.

As an only child dealing with an absent, unloving father and an uneventful town in New Jersey, Pandolfo finds an escape through drinking, using drugs, and fooling around with cretinous boys. Pandolfo decides to relocate to New York City for college, paying her own way to NYU in hopes of becoming, in some way, a writer. The constant pulse of New York’s nightlife sucks Pandolfo in almost immediately, as it does to many young transplants, and she finds herself drinking her way through every bar in the city and making out and hooking up with strange men. What comes to follow is a series of tales about sexual encounters and would be encounters with men who do some rather questionable things to her.

The spattering of tales of inebriation and sexual misadventures reach a steady narrative when Pandolfo meets “The Columbian,” a man who seems to be a boyfriend worthy of love, but ultimately cheats on her throughout the entire relationship and gives her chlamydia. As Pandolfo’s life in the Big Apple goes further downhill, the show’s tone switches from lighthearted comedy to serious. Pandolfo decides to reevaluate things when she and her roommate endure a particularly horrific Valentine’s Day.

Pandolfo’s stories are augmented by audio clips of voices which she converses with during the show, as well as a slide show of photos that help to establish time and place (as well as give us a visual glimpse into Pandolfo’s teen years). Pandolfo also lines the stage with bottles of booze which she swigs from as she tells another tale of drunken foolery. (The built-in bar of UNDER St. Marks also helps to set the scene). Pandolfo has a warm, effervescent stage presence that holds the audience’s attention well. Director Jonathan Warman helps Pandolfo make the most of her entertaining material as she deliveries each story with spot-on timing. Pandolfo’s engaging story might be even more powerful had she mixed more of a serious tone in with all of the laugh inducing stories as her tales hint at darker issues. Overall, Love in the Time of Chlamydia will surely hit home with women who have tried to date in New York City or have spent any time partaking in the city’s debaucherous bar scene.

(Love in the Time of Chlamydia plays at Under Theater, 94 St. Mark's Place between First Street and Avenue A, through March 4, 2012 as a part of The Frigid Festival. Performances are Wednesday at 6PM and Sunday at 5:30PM. Tickets are $13 and are available at frigidnewyork.info or by calling 212.868.4444.)