Tickets are $25 and can be purchased at www.nymf.org or through ovation tix.

Book, Lyrics, and Direction by Jason Slavick; Composed and Music Directed by Cassandra March
Produced by Liars and Believers 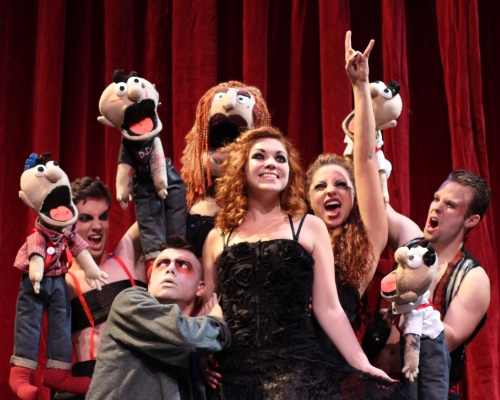 Gracing our stages from their home base in Boston, Liars and Believers remounts their inaugural show Le Cabaret Grimm as part of the 2012 New York Musical Theatre Festival. Grimm was penned and directed by Artistic Director Jason Slavick with music by Cassandra March as a “punk cabaret” based on Grimm's Fairy Tales. The end result is part cabaret, part burlesque, part children’s theatre, and a perfectly good time!

Grimm features a truly ensemble cast of dynamic performers, each bringing a unique talent and each featured in turn. Some are better dancers, some better actors, but all are shown to their best light, often excelling more in individual roles than group numbers. Haley Selmon leads the core as host Veronique, guiding the narrative and enhancing the evening with her stunning vocals, comic aptitude, and charismatic presence. Ashley Lanyon’s capacity for power and sweetness in her songs and general charm make her a perfect ingénue, paired with the strapping and gallant Bart Mather. Jenna Schoen and Brandon Timmons have beautiful technique showcased in several movement phrases and a pas de duex. And Alessandra Vaganek is so outrageously funny as to stand out from the already diverting cast. Meanwhile Meryn Beckett delivers the best schtick in town as the Harold and Davie Kaim tackles baritone ballads and little-girl drag with equal gusto.

These performers are decked in the most delectable designs. Costumer Kendra Bell works seamlessly with mask artist Eric Bornstein and puppet designers Tyler Brown and Alexandra Caporale to create a delicious and enchanting world for the show. Bell’s costumes combine the decadence of seedy nightlife with the whimsy required for fairy tale stories. She makes ingenuous use of color and temporary pieces for character changes. Bornstein’s lion mask is a masterwork, and the puppetry reaches its pinnacle with the Avenue Q-esque and absolutely uproarious conjoined twin. This work is highlighted and offset by the subtle but dynamic lighting design by Aaron Sherkow.

Of course, so many elements coming together so seamlessly -- and being staged so well -- can be attributed to the successful work of Slavick, whose direction combines both nuance and joy. With Marsh’s lovely melodies and saucy variations in musical style, the collaborators concoct a heart-felt and humorous production that marries hope with sass and makes an audience of all ages happy. There are some numbers which are more successful than others, and moments when the momentum lulls, but overall the production adds up to a lovely show.

Le Cabaret Grimm is the perfect show for anyone out there who enjoys a classic tale or impeccable presentation.

(Le Cabaret Grimm plays at the 45th Street Theatre, 354 West 45th Street between 8th and 9th Avenues. Remaining performances are Friday, July 27th at 11PM, and Saturday, July 28th at 7PM and 10PM. Tickets are $25 and can be purchased at www.nymf.org or through ovation tix.)