Off Off Broadway, Play with Puppets
Runs through 2.4.12
Dixon Place, 161A Chrystie Street 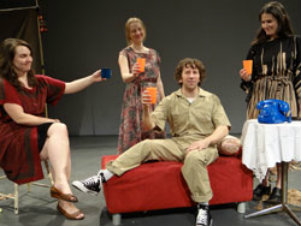 BOTTOM LINE: An educational, entertaining and emotional piece of puppet theater about three legendary women and their primate friends.

In the 1960s and 70s, famed archaeologist Louis Leakey selected three women to conduct extensive field studies of apes in their natural environments. Jane Goodall, Dian Fossey and Biruté Galdikas went on to make groundbreaking observation of chimpanzees, mountain gorillas and orangutans (respectively), while also developing intimate bonds with individual animals. Their discoveries have forever changed our understanding of where we, as humans, fit into the spectrum of species. These three women are the collective subject of Leakey’s Ladies, the latest production of puppet theater from the Jim Henson Foundation-fueled company Drama of Works.

This show was originally conceived as three separate (and rather short) plays about each woman, written by Erin Courtney (Jane), Rachel Hoeffel (Biruté) and Crystal Skillman (Dian). The pieces, however, have been masterfully blended together into a single, coherent story that both characterizes the legendary women as individuals and explores how they corresponded, offered support, and sometimes disagreed with one another. It also portrays their relationship with their mentor, Louis Leakey, who becomes a sort of spiritual guide for them after he passes away. The scenes about each character overlap and bounce off one another, often linked by letters of correspondence read out loud. In fact, the stories are so seamlessly integrated, that it is hard to imagine that they ever existed in any other form.

The three women are wonderfully portrayed by a cast of talented actors. Meghan Williams is amazingly on-target as Goodall, depicting her as quirky and wide-eyed, but also as an intelligent and incredibly keen observer. Her story of her childhood curiosity about how chickens lay eggs is one of the most hilarious moments in the show, but also serves the dual-purpose of providing insight into how innately ingrained her work is into her personality. Amy Carrigan presents Galdikas as a kind woman who is dedicated to her work (and I must admit, of the three women, I have the most limited concept of Galdikas’s actual personality, but I trust that Carrigan does it justice.) Tatiana Pavela infuses her portrayal of Fossey with the same balance of toughness, emotionality and short-fused temper as Signourney Weaver does in the film Gorillas in the Mist. Over the course of the show, Pavela nails a large spectrum of emotions, all of which Fossey seems to experience with heightened intensity. With her battle against poachers and her legendarily tragic end, Fossey’s story implants a serious and sad undertone to the otherwise fun and entertaining play.

Perhaps what is most successful about Leakey’s Ladies is the multi-dimensional storytelling that is packed into its lean 90 minutes. Video projections, shadow puppetry and original music give the show a “multi-media” flare that adds visual spectacle to the fascinating story, but without relying heavily on special effects or technology to create dazzle. In fact, there’s a charming “vintage” feel to most of these effects, which could easily have been achieved in the era in which the play takes place.

It is also important to note that Leakey’s Ladies is a puppet show, with the apes portrayed by a mix of puppets, masks and costumes by David Valentine. The puppets range from a small, hand-manipulated baby chimpanzee to Digit, the silverback Gorilla, a marvelous costume-puppet (think Lion King) that stands on all fours at about six feet tall.

At once educational, funny, serious and visually remarkable, Leakey’s Ladies is one of the most well-rounded shows I’ve seen in a long time and one of the best uses of “experimental” or “multi-media” theater I’ve ever seen. To top it off, it is showing at what is quickly becoming my favorite theater in New York. Dixon Place, the self-proclaimed “Laboratory for Performance,” is a sleek, open, no-bad-seat-in-the-house theater wedged behind a comfortable and homely bar, meaning you don’t have to go anywhere else for your before/after-show drink. In fact, the bar is so nice and cozy, it would be great even if it didn’t have a theater attached to it. Together, the two spaces are almost too good to be true. I’m glad Goodall, Fossey and Galdikas spent so much of their lives in the jungle, but I think I’d rather be at Dixon Place watching affordable, quality theater about them.

(Leakey's Ladies plays at Dixon Place, 161A Chrystie Street, through February 4, 2012. Performances are Fridays and Saturdays at 7:30 PM. Tickets are $16 advanced, $20 at the door or $12 for students and seniors. To purchase tickets, visit dixonplace.org or call 212.219.0736. For more information visit dixonplace.org.)