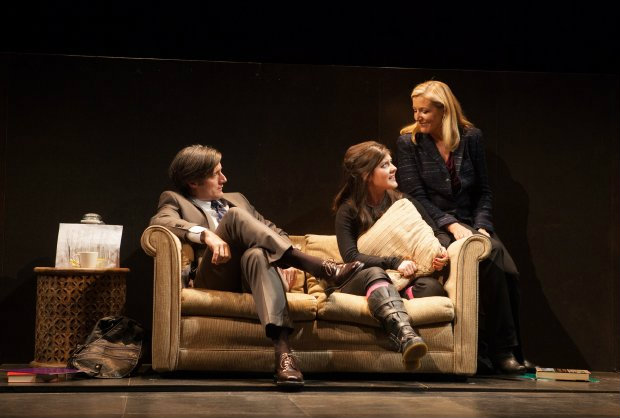 BOTTOM LINE: A compelling portrait of a woman who struggles to hold her life together despite a dying father, an unrelenting boss, a questionable husband, and all the people in between.

The death of a family member, a flawed marriage, infidelity, tenuous parent/child relationships, and the lies we tell ourselves to make all of these problems fade into the background of our daily lives: such problems are not uncommon in our society, nor are they uncommon subjects for the theatre. What makes Harper Regan stand apart from plays that have dealt with such issues before is the chronicling of these events through the singular perspective of the title character. This is not a play that reveals Harper’s problems in a surprising and dramatic turn of events that leaves the audience gasping, but a play that acquiesces to her problems with a matter-of-factness that is all too familiar for anyone living a less than ideal life. We all have baggage: Anna Karenina jumped in front of a train; Harper Regan made breakfast the next morning and went to work.

First presented at London’s National Theatre in 2008, Simon Stephens’s new play has crossed the Atlantic Ocean where it now plays at the Atlantic Theater. The play begins with the title character (Mary McCann) asking her boss for time off to visit her dying father in the hospital. She is denied the time off and the rest of the play follows Harper as she figures out how to negotiate her job, family, and personal life. In the large cast of eleven players, each character exists solely in relation to Harper, most of them sharing her spotlight for just a single scene. At times it feels as though the only thread between the scenes is the fact that Harper is present in all of them. But what may appear as randomness, is actually connected by one woman’s personal experience. It almost feels more appropriate to title Stephens’s play A Rough Week in the Life of Harper Regan, or something more eloquent along those lines. Because unlike plays named for a title character (Hamlet, Medea, Miss Julie, Sweeney Todd, etc.) Harper Regan is not about a person’s life shattering, but about someone picking up the pieces and carrying on.

Mary McCann shows tremendous expertise and restraint as Harper. As she steers through the events in Harper’s life, McCann never gets bogged down in the dramatics. In fact, much like Harper, McCann’s performance grows inch by inch.

Through Harper’s journey we see her encounter a variety of interesting men: her hard-nosed and peculiar boss (an oddly humorous Jordan Lage); a young college student (the charming Stephen Tyrone Williams); an alcoholic, leather jacket-wearing journalist (played with skeevy smugness by Peter Scanavino); and a warm-hearted adulterer (the ever-reliable Christopher Innvar). Eventually Harper tolerates a meeting with her supposedly vile mother (played by Mary Beth Peil in one of the evening’s most memorable performances) who reveals that Harper’s idillic vision of her father was false. Harper returns to her worrying husband (the wounded Gareth Saxe) and prickly daughter (a piercing Madeline Martin) to face their future sans rose colored glasses. No relationships are drawn in black and white, and all characters vary in their ratios of good and bad qualities. As Harper peels away the facade and begins to live in truth it becomes evident that sometimes we need a chaser to swallow hard reality.

Gaye Taylor Upchurch’s direction avoids heavy-handedness at all possible costs, and the play is better served due to this approach. Although the evening is engaging, some audience members may scratch their heads and wonder where the play is going or the ask the popular question “What is the point?” Harper says something to the effect of “I didn’t realize that while I was waiting for my life to start, I was already living it” (a poor paraphrase at best). Do not wait for “the big event” for this play to begin. Harper Regan exists in the moments in between the big events -- the moments where our hands, bloodied, collect the shards of our once familiar lives and tape them back together again. The tape does not always hold, but we either convince ourselves that it will, or recognize its flimsiness, and prepare for the next set of cracks to appear.