By Francine Volpe; Directed by Scott Elliott
Produced by The New Group 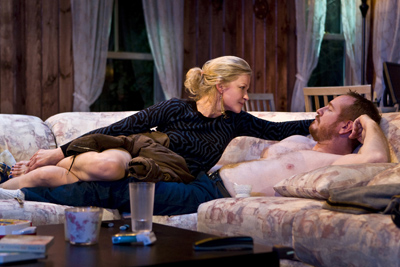 Grethen Mol and Darren Goldstein in THE GOOD MOTHER. Photo by Monique Carboni.

BOTTOM LINE: A provocative and intense, but ultimately disappointing, look at one single mother as she attempts to protect her autistic daughter from potential harm.

As the curtain rises on The Good Mother, Larissa (a hard-edged, yet fragile Gretchen Mol) is sitting on her sofa and talking non-stop to the babysitter she’s hired to care for four-year-old Allison. At first glance, Larissa seems ditzy and it is obvious that the babysitter, Angus, (Eric Nelsen, well cast as the disaffected, eye-rolling teenager) is overtly bored by her prattling. As he sits on the couch watching the 33-year-old primp, he says little and telegraphs his will-you-hurry-up-and-leave-already contempt for her. His dark attire is ripped and he looks like a typical Goth kid — with black nail polish on his fingers and kohl ringing his eyes. All we know about him is that he is a college student in “trouble” — a description that tells us next to nothing about who he is or what he is capable of.

Over time we learn that Angus is the son of Larissa’s former high school counselor Joel (Mark Blum), a listless, depressed and anxiety-filled now middle-aged man who has been accused of having sex with an 18-year-old patient. Larissa read about the charge in The New York Post and in an apparent effort to show her support for him, showed up unannounced at his home, pie in hand. It was this interaction that led Larissa to hire Angus for a highly anticipated date with Jonathan (Darren Goldstein), a macho trucker whose presence suggests incipient menace. But is this impression accurate, or is he a just a big lug with a heart of gold? We never really find out, one of the play’s deficits.

That said, the pair’s first date goes swimmingly. Nonetheless, the next morning Larissa is unnerved by suspicions that Angus has somehow hurt Allison. Since the child is a non-verbal autistic, how Larissa discerns this — she mentions neither bruises nor signs of irritation and makes no mention of the child pantomiming abuse — is a mystery.

And therein lies the biggest problem with The Good Mother. While each scene is well-acted and suspenseful, the dialogue is enigmatic and ultimately unsatisfying. Yes, Larissa wants to be a loving parent, but what this means to her — especially since it is impossible to tell if her suspicions are real or imagined — is unclear.  What’s more, if her angst is in fact mental illness, we have no idea what precipitated her downward spiral, a descent that has catapulted her from owning a successful bookkeeping business to living — as she now does — in a ramshackle home without heat, and later without light. Even when Buddy (a charismatic Alfredo Narciso), her high school boyfriend, now a police officer, shows up to talk to her about the complaint she’s filed against Angus, it does little to provide the background necessary to give the play the emotional resonance it needs.

In the end, The Good Mother offers terrific form but little substance. Indeed, the drama is begging for additional scenes to provide context and fill in the narrative gaps. Then, and only then, will we know for sure whether we’re witnessing one woman’s decline into paranoia and desperation, or if in fact, she is a hero worth cheering on.

(The Good Mother plays at The Acorn Theatre at Theatre Row, 410 West 42 Street, through December 22, 2012. Performances are Mondays through Wednesdays at 7PM; Thursdays and Fridays at 8PM; Saturdays at 2PM and 8PM. Schedule changes for Thanksgiving week, please visit telecharge.com for details. Tickets are $61.25 each and can be purchased at telecharge.com or by calling 800-432-7250 or 212.239.6200. For more show info visit newgroup.org.)