Purchase in person at the box office (Madame Tussauds at 234 West 42nd Street) online at experiencetheride.com or by calling 866.299.9682. 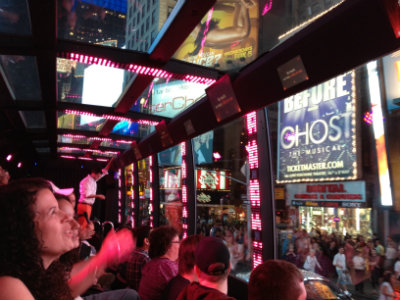 BOTTOM LINE: If it's your thing, take a high sensory trip through Midtown Manhattan aboard a multi-million dollar theatrical bus.

What is The Ride? The answer is a difficult one because each "show" is invariably different as any trek through Times Square can bring unexpected events. However the constant is that you're always sure to see some characters (who may be performing or not) and the obstacles are ever-changing. New Yorkers have come to expect the unexpected and are immune to the majority of the eccentric and brash behavior on exhibit daily in Midtown Manhattan. Nevertheless, the tourist comes to this experience with fresh eyes and can also be observed daily being swept up in lights and Naked Singing Cowpeople. The Ride is for those tourists who want to crank the volume up on this patch of the island and seek even more distractions without needing to move a muscle.

Essentially, The Ride takes Midtown and forces it to be even more of what it is on the surface: loud, bright, commercial and chaotic. To call The Ride a tour would be unjust to those knowledgeable tour guides on the double decker buses and Circle Line boats. To call it theatre would belittle many of the playhouses the innovatively designed Ride busses whiz past. Yet this multi-million dollar creation incorporates elements of both.

Will you enjoy it? Well, that depends on what you’re looking for. There were certainly individuals on the bus I rode who were having a spectacular time. These are the same New York visitors who have 100 photos of the 24-hour Apple Store (one of the top 5 most photographed NYC locations, we learn on The Ride) taken on their iPads. I think it really comes down to how you wish to experience New York. You can see it truthfully with all of its awe-inspiring accomplishments of culture, art and commerce, or, you can stay immersed in the gift shop world in which the phrase "only in New York" can be muttered at every glance (as it is on this trip). If you or your visiting aunt prefers the latter, then The Ride may be what you're looking for.

Billed as "rolling state-of-the-art theatres" both the original The Ride, and the new Fazzino Ride occur on-board specifically designed theatrical vehicles; the tallest allowed by federal law, fitted with stadium-style seating that orients the 49 participants sideways so as to look through the massive windows looking out over the midtown streets. For the record, I would like to say that the design of the bus is like nothing I've ever seen and ultimately could be a fantastic new vessel for bus tours as well as theatrical possibilities. Where The Ride starts to go wrong is by adding incessant LED lighting and 40 video screens. Does a tour of Times Square really need MORE distracting screens and lights? Still, there are certainly a few sights and experiences unique to The Ride. There are moments where you feel as though you are stopped suspended over a crowded intersection and are able to visually take everything in without worrying about getting bumped into or ran over. But these moments are brief.

My review is specifically for The Fazzino Ride, the newest spin-off of 2010’s The Ride. However based on descriptions of each it seems the only real difference with The Fazzino Ride is the inclusion of Charles Fazzino’s recognizable 3-D pop art displayed on the video screens and on the side of the bus as well as Mr. Fazzino’s voice overheard describing some attractions. He adds little artistic integrity to what is mostly a travelling NYC souvenir snow globe and occasionally Mr. Fazzino makes some eyebrow raising comments such as, “Fifth Avenue (shopping) is where people of every culture of New York City meet.” I don’t really know if Fifth Avenue is the primary example of cultural diversity in our fair city.

Our tour guides were Stewart and Julie. There may very well be several “Stewarts and Julies,” which would make perfect sense. Their role is to act as tour guide, game show host, comedian, actor, singer and overall fun-maker. They have a script and are sure to point out the highlights like The Chrysler Building and Grand Central, but more often they came off as searching for what to say next. Julie was at times more interesting to the construction workers we passed by. During my ride, Stewart spent the vast majority of the time making fun of people on the streets which quickly went from good-humored to awkwardly mean-spirited. The goal is to make the streets the stage at whatever cost, I assume -- which on my trip incited some bigoted comments from my fellow audience members being shouted out as well.

There are street performers we “stumbled upon” throughout the trip. Some of the setups and performances were the most enchanting parts of The Ride. These included a man still celebrating New Year’s Eve in the middle of Times Square, a hopeful tapping Broadway actress looking for her audition and glowing ballet dancers situated in the Columbus Square fountain. However, the most standout performance was by the freestyle rapper who created something remarkable out of what he found around him on the streets more than anyone else. This talented performer raced along the sidewalk of Eighth Avenue following along with the bus as he freestyled about everything and everyone he came upon. No special effects, just a moment of poetry inspired by New York streets. This is something The Ride has the capability of creating if it wasn’t so intent on delivering a sensory overload of New York including a karaoke version of “New York, New York” blaring out into the streets from the bus.

In the glass enclosed bubble of a bus there exists an opportunity to experience something unique in Midtown Manhattan: moments of silence. This same viewing vehicle could take us right inside the frenzy from a place of calm like a submarine in a coral reef. This would be far more unique and give the audience the possibility to have their own experience taking it all in. As it is, The Ride simply moves too fast as though it were replicating one of those panoramic photos of Times Square at night in which the cars and people are sped up to flashes of color and light.

(The Fazzino Ride and The Ride box office is located at Madame Tussauds at 234 West 42nd Street. Fazzino rides are Fridays and Saturdays at 8:30PM. Departures for The Ride are Wednesdays and Thursdays at 7:30PM and 8:30PM; Fridays at 7PM; all day on Saturdays starting at noon, and Sundays at noon, 2PM and 4PM. Tickets are $74 and are available in person at the box office and at experiencetheride.com or by calling 866.299.9682.)