Fly Me to the Moon

Written and Directed by Marie Jones 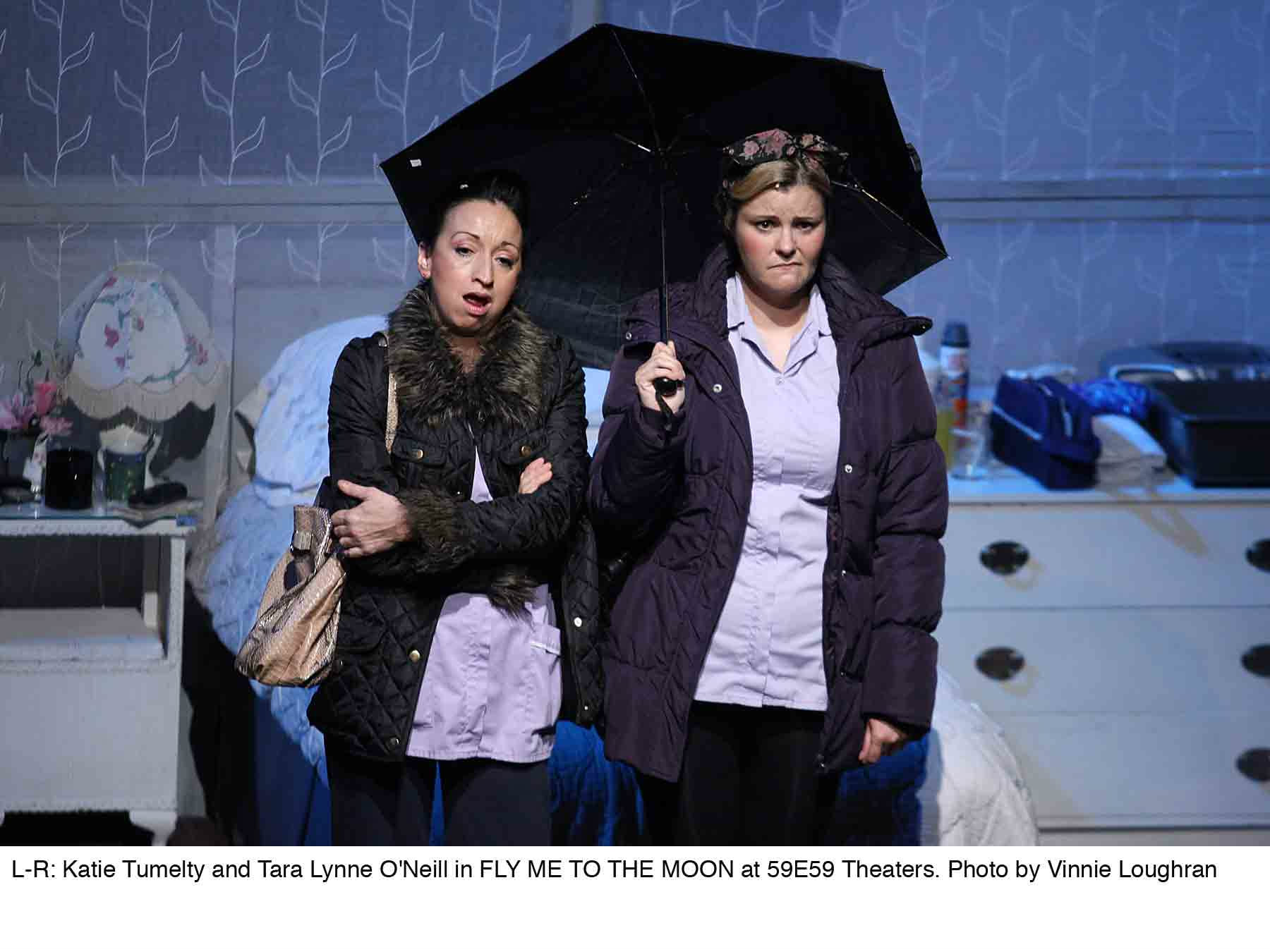 BOTTOM LINE: A darkly comic story of two Irish care workers who find themselves in a financial pinch and at a moral crossroads when their patient suddenly dies.

Two care workers struggle with an ethical dilemma in Marie Jones's new play Fly Me to the Moon, presented as part of 59E59's 1st Irish Festival. Jones is a champion of this genre that the Irish write so well: bleak comedy that manages to elicit laughter from moments of dark psychosis, or deep melancholy. Jones's work embodies black humor, as exampled by her play Stones in His Pockets, for which she is best known by American audiences. While Fly Me to the Moon is perhaps a simpler brand of storytelling, it maintains a comedic virtue, while exposing the greed and desperation that lies underneath these all-too-human characters. Perhaps when confronted with a hopeless situation that exposes one's sinister nature, our only recourse as an audience is to laugh and hope that we ourselves would behave better, knowing deep within that probably...we wouldn't.

Loretta Mackey (Tara Lynne O'Neill) and Frances Shields (Katie Tumelty) are two struggling care workers to the elderly man Davy, whose only two pleasures include betting on horse races and Frank Sinatra. When Davy accidentally slips in the bathroom one morning and dies, Loretta and Frances struggle with the immediate question of how to deal with a dead body. That is until they arrive at a much more juicy predicament. As fortune would have it, Davy dies on the day his betting horse finally comes in, winning him £500 (such is the luck of the Irish). Although this sum may not seem to be much, it has the potential to improve the lives of Davy's low-earning care workers. However, these women do not possess the keen minds or the cool-headedness to pull off a heist, let alone steal £250 each from a dead man. The women flail about attempting to justify and constantly re-work their plans, ultimately digging themselves deeper and deeper into a hole unsure if they will ever be able to climb out.

During the intermission of the performance I attended, an audience member turned to me and said "it's kind of like an 'I Love Lucy' episode, just a really dark one." I was struck by how this patron hit the nail on the head, and I wish I could take credit for the humorous and astute observation. Frances is the chief operator who leads the slightly unconvinced, though never oppositional, Loretta down a scheming path of deception and cover-up. And much like Lucy and Ethel, they are not quick enough to keep up with their mounting pile of Bon Bons.

O’Neill portrays Loretta with a wide-eyed trepidation; a good catholic girl who always tries to do right, and cannot keep her composure when she does otherwise. O’Neill’s earnest and delightfully awkward performance is a wonderful contrast to Tumelty’s Frances. Tumelty’s ignorant self-assuredness is so blindly at odds with her co-star that they make a formidable duo on the stage, and open the doors to hilarious comic possibilities (including one particularly irreverent bit with a wheelchair).

The play shifts back and forth between the events in Davy’s apartment, and a confession style tell-all where the two actresses divulge the whole truth of their actions. These women are not noble, nor are they implicitly bad. The comedy and the drama in Fly Me to the Moon arise from two characters who seriously wrestle with their consciences and walk the line between what is right and what will help themselves and their families. Perhaps what Irish playwrights like Marie Jones have truly discovered is the way to find the humor in a stark reality that offers very little hope. For when caught in a seemingly impossible situation that reveals all of our human ugliness, what else is there to do but shake our heads and laugh?