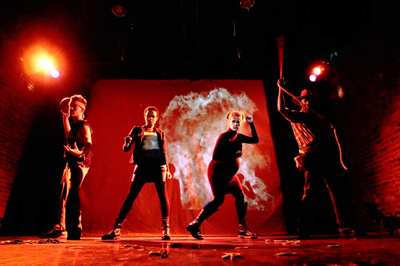 A scene from FLYING SNAKES IN 3D.

BOTTOM LINE: A hilarious and unexpectedly touching story of why we make theatre and how to save the world from killer flying snakes.

Don’t let the title fool you. Everywhere Theatre Group’s latest offering Flying Snakes in 3D is a heartfelt pice of theatre. It’s an epic mix of B-movie sci-fi horror, the avant garde, and unabashedly honest autobiographical elements in which young broke theatre artists challenge themselves to do the impossible with indie theatre-actually make money. They decide the best course of action is to create a play that is better suited to film. Thus the weirdly wonderful Flying Snakes in 3D is born. An awesomely campy tale of mutant killer snakes that are accidentally released from the CIA scientific headquarters where they were created who are flying through the city gruesomely feasting on helpless victims is juxtaposed with vignettes from the actors accounting their troubled lives and why it is that they long desperately to create this thing called theatre and ask the question,” If theatre is a dying art, why are we still making it?”

I was so pleasantly surprised by Flying Snakes in 3D. It’s a refreshingly original piece of theatre that is pretty damn funny, yet still asks the audience to take an honest emotional journey and really see the artist behind the crazy characters on stage. It examines and rages against the privileges offered by gender, race and class and how unfortunately that plays into what stories we hear. Flying Snakes in 3D is just pretty freakin’ fantastic. I only hope that this piece gets a well deserved life past the Ice Factory Festival. Everywhere Theatre Group is definitely a company to keep an eye on, and I know that they will continue to create inventive and socially relevant work that will continue to delight audience and make them question their place in the world.

(Flying Snakes in 3D plays at the New Ohio Theatre, 154 Christopher Street, July 4-7, 2012 at 7PM. Tickets are $12-$18 and can be purchased at www.smarttix.com. For more information visit www.NewOhioTheatre.org/flyingsnakes.htm)