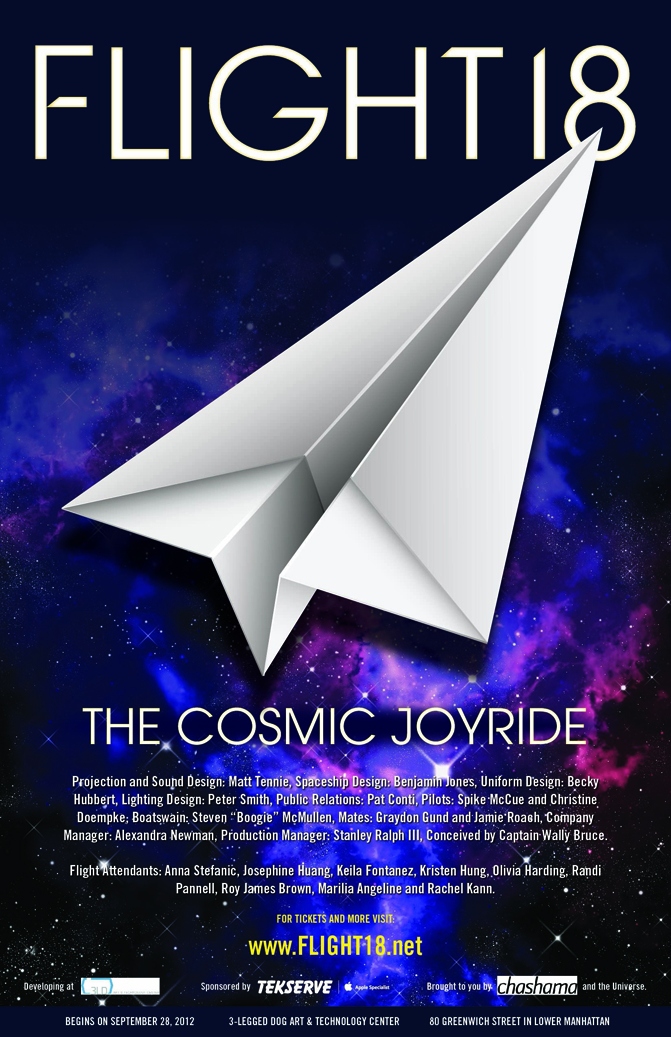 BOTTOM LINE: Weird and random? Pretty much. Creative and one-of-a-kind? For sure.

Described in press notes as “an interactive, multi-dimensional, cosmic joyride, complete with flight attendants, pilots and a DJ,” I had no clue what to expect as I entered the new show FLIGHT18. And that’s exactly why I wanted to attend. It’s not a play, it’s not a dance show, it’s not a poetry slam...it’s somehow a mesh of all of these things yet none of them at the very same time.

This offbeat adventure in which “the only rule is to feel free” intrigued me long before I entered the performance space, as I had not an average curtain of 7pm or 8pm, but a 7:07pm flight departure. When I arrived at 3LD Art & Technology Center, I was greeted by a flight attendant who asked me “What do you believe?” I answered and was then told I could make a wish by ringing the bell next to me.

Once out of the lobby, I entered the ‘spaceship’ with my fellow guests -- a huge, open room filled with projector screens, a variety of chairs and separate areas to explore. I was asked by the warm but so cool Zelda (one of my favorite people aboard!) if there was anything I wanted to leave out of the room, material or non-material. I was feeling a little anxious that day, so I had Zelda remove my anxiety and leave it outside. Why not!

What followed was a partly planned, partly improvised evening conducted by a captain, flight crew, and yes, a DJ. At one point, I wrote down a -og of questions that myself and the other travelers posed to aliens. At another point, I watched my friend slide down a stripper pole. At another point, I took a nap on very comfortable foam padding. I hula hooped, ate an apple, danced with strangers, played cards and made a paper airplane. I watched one flight attendant deliver a poem in Spanish, I watched another sing in Chinese. It was a totally unpredictable, bizarre, experience. But I have to say, I was into it the whole time.

It’s hard to convey the gist of this event, but I recommend FLIGHT18 for those who want an off-the-beaten-path theatrical endeavor. If you are willing to let your guard down, leave your cynicism at the door and just roll with it, you will experience a highly imaginative and inventive production surely unlike any other currently running.