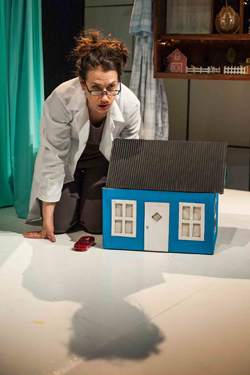 BOTTOM LINE: An intelligent, quirky and deeply moving solo show that explores the parallel between mental illness and whale evolution.

“What kind of a creature leaves her sister stranded?” This question, which Paleontologist Pammy poses at the end of a lecture that hangs in the area between reality and fantasy, plucks at one of the most interesting themes of the one woman show Evolution, written and performed by Patricia Buckley. In what ways has human evolution gone too far? What have we, as creatures, lost in the process of achieving our dominance in the world?

Evolution is a smart, quirky and deeply moving play, brilliantly executed by Buckley. Though there is only one performer, there are a handful of distinct characters, each of whom Buckley infuses with a lifelikeness and individuality that most actors fail to achieve with a single character. In fact, Buckley frequently forays into even tougher challenges, impersonating one character as another or trying on signature costume pieces of a character she currently is not, which she acheieves in a shockingly unconfusing way.

The story revolves around the character Minnie, a woman who, as her worried mother says, is “not good.” In other words, Minnie is depressed and has had a long history of hospitalization and medication for her problems. As the show progresses, though, a parallel is implied between Minnie’s unhealthy behaviors, which include taking endless showers and trying to jump into a fish tank, and her academic sister Pammy’s field of study — whales and, specifically, the theory that they evolved from land mammals. Since all life started in the water, the whale is a creature that “decided” (through evolution) to return to the sea. As Pammy’s studies are revealed, Minnie’s illness takes on a complexity that begs the question: Is she really “ill,” or is she just poorly adapted to the norms of society? Is her attraction to water a warning sign of suicide, or an uncontrollable desire to be her true self? Ultimately, Evolution puts human specimens under the microscope and asks us to reassess what is “normal” behavior and why we’re so afraid of everything outside of that.

Brainy as it is, Buckley, like a good science show host, presents her big ideas in a way that is easy to understand, unpretentious and entertaining. She’s also very funny and even the show’s most poignant, poetic and tragic moment has a strong undercurrent of humor.

Evolution is one of the most original, inventive and thought-provoking plays I’ve seen in a while. Elements that I’ve seen fail in other shows — from the intellectual script to the projections that, at one time or another, land on every flat surface on the set — work here, with a seamlessness that is rare and wonderful. If you like theatre that makes you laugh, cry and think, then Evolution couldn’t come more highly recommended.