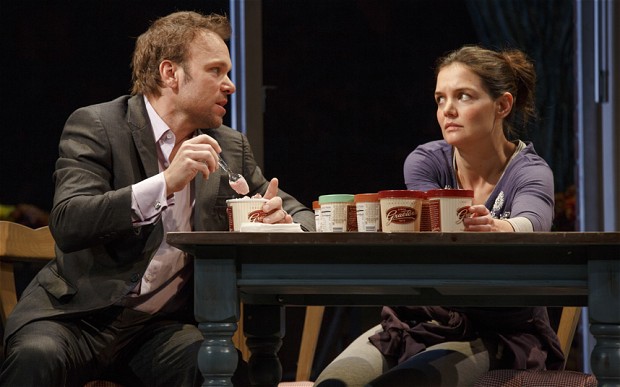 Norbert Leo Butz as Jack, and Katie Holmes as Lorna in DEAD ACCOUNTS.

Last year, Theresa Rebeck penned one of my favorite shows of the Broadway season -- the wickedly acute Seminar, starring Alan Rickman. Her latest piece is another dark comedy called Dead Accounts, now playing at the Music Box Theatre. In Seminar, Rebeck’s words meshed brilliantly with Rickman’s distinctive portrayal of a cantankerous writing professor. Likewise, Accounts features a nuanced, enthralling turn from Norbert Leo Butz (Tony winner for Catch Me if You Can) although the supporting characters here are perhaps not as colorful as those from Rebeck’s previous piece.

Dead Accounts opens with Butz’s Jack returning from New York City to his childhood home in Cincinnati, Ohio. He’s catching up with his sister Lorna (Katie Holmes) who is living at home to help their mother (Jayne Houdyshell) care for their sick father. It's unclear at first why wildcard Jack has returned, but he does admit to his old best buddy Phil (Josh Hamilton) that he’s separating from his wife Jenny (Judy Greer, doing her best in an underwritten role). But what's Jack not saying? Semi-spolier alert: let’s just say he has...taken...X-amount of money...from bank accounts...that aren’t his. Jack’s bent on keeping the cash, Jenny’s pissed, and as this is a “Character Returns Home After Being Away for a Long Time” comedy, you know unresolved issues from the past will rise to the surface in a matter of sec-- oh, yup, here they come: Why does Lorna live at home? What’s she really scared of? Is Phil still in love with Lorna? Why does New Yorker Jenny hate on the simpler life of Jack’s family? Everyone's got more opinions on these matters than they do about Jack's insane act of theivery, but seeing these issues fleshed out is definitely a fun journey to take with these actors.

Not only does Butz nail Rebecks’s sometimes garrulous language (in particular, a monologue about fancy New York steaks vs. simple Cincinnati cheese coneys is expertly delivered) but his physical choices add so much to his portrayal of Jack as a neurotic firecracker. Hamilton is a charming presence as the sweet-natured Phil; watching him pursue Lorna is a comic yet poignant highlight. Houdyshell also rings true as a concerned but sensitive mother. After being mocked by Jenny, Houdyshell provides a heartbreaking, tender, thoughtful reaction that truly surprises. Frankly, however, we are already in Mom’s corner since Jenny is too much a one-note villain, one of the play’s weaknesses.

Greer is reduced to delivering vaguely opinionated lines like “What’s stupid is breaking the law,” a shame because she is such a capable actress. She’s even dressed in all black so we know we aren’t meant to like her. Plus, Jenny and Jack’s drama is never all that interesting because they are fighting from the first moment they’re together. Are they meant to be together? Are they still in love? Do we have enough information to make an informed decision on the matter? No way.

That leads us to film star Katie Holmes, making her second Broadway appearance following All My Sons. Holmes has a natural presence that draws you to her and boasts a winning smile with a Julia Roberts warmth to it. She struggles here, though, in authentically arriving at her character’s emotional peaks. When Lorna’s sad, Holmes tries to cry. When Lorna is mad, Holmes speaks louder than when she wasn’t mad. It’s not a bad performance (you do actually believe her as an uptight homebody) but it’s a theatrical one, especially up against Butz who has created a flesh-and-bones individual who could be walking down the street right now.

The play does urge you to decide if what Jack did was wrong, but it plays more for laughs, thus downplaying the dramatic urgency. I also thought it was a tad bizarre that Jack’s family barely has any reaction to the insanely large dollar amount that currently resides in his bank account. You don’t want any of that money?! Really?!

And yet, this is a solid, engaging night of theatre. Dead Accounts is a well structured play featuring enough witty dialogue, intelligent performances and yes, star power (K-Holmes may not be the strongest link but, come on, it’s Katie Holmes right in front of you! That’s exciting!) to easily recommend it.

Oh, and it’s true. None of the stars received entrance applause. But the boxed wine did. And yes, the wine deserved it. It’s hilarious.