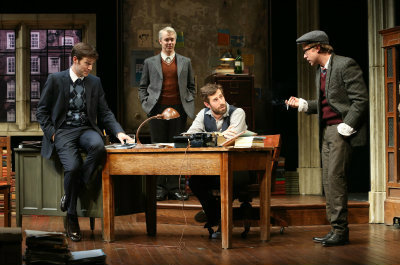 BOTTOM LINE: An enjoyable and accomplished tale of how we strive to achieve our youthful ideals while struggling with the reality of trimming expectations.

A friend of mine often likes to remind me that “life’s a bitch, and then you die.” His fiery cynicism can most probably be attributed to a strange sense of humor and the overt contrast between his youthful idealism and his present embodiment of a man working an office job to support a small but growing family. And this topic of youthful ideals contrasting with pragmatic realization is one of the big focal points in Roundabout Theatre Company’s new production, The Common Pursuit, a play written by Simon Gray which has been revived for its second visit to the New York theatre scene.

Set in the dorms of a Cambridge college, a group of friends are coming together to create a literary magazine, a masterpiece of curated intellectual creativity entitled "The Common Pursuit." Stuart, the editor (Josh Cooke), dreams of populating those pages with the best poetry and prose in the country and enlists a group of diverse characters to help him in his endeavour. Each of the six characters of the ensemble is peculiar and slightly bizarre in their own way, with their distinct personalities providing much of the comedy of the play. Nick (Lucas Near-Verbrugge) is a loud, extroverted, chain-smoking hedonist, who follows every sentence with an unhealthy bout of coughing. Martin (Jacob Fishel) is a seemingly genuine but slightly insecure publishing hopeful whose loyalty seems to know no bounds. Humphry (Tim McGreever) is the intellectual powerhouse of the group, but his sensitivity and intellect is shadowed by his own self-deprication. Marigold (Kristen Bush), Stuart’s girlfriend, is drawn by his idealism and infatigable drive to see his dreams realized. Peter (Kieran Campion) is the womanizing hustler whose main occupation is the chase of the fairer sex.

The play follows our group of friends over 20 years spread out in three acts, with the personality traits of each character evolving over this period as time puts each of them in their place. The second scene, 8 years after graduation, takes place in Stuart’s peeling office in London, which shows how "The Common Pursuit" can barely sustain itself, the general public being much less interested in the literary delights of the magazine than his peers at Cambridge ever were. Martin, who has gained some wealth through publishing and shed off some of his insecurities, offers to fund the magazine. But Stuart realizes that his youthful editing dreams need to be shed in light of the looming responsabilities of building a family with Marigold.

Gray’s themes in the play are not just about the resignation of trimming one’s youthful dreams for the more pragmatic goal of securing the material needs of modern life, it also focuses on how personalities change over this time, and how with age, we perhaps become less capable of even the more basic virtues. As time progresses, Humphry’s self-loathing has made him a sort of mirror to others, reflecting their moral failings together with a scoop of sarcasm for measure. Marigold’s desire to support Stuart in his magazine leads her to some pretty extreme acts, and what looks like the most pure, if misguided, form of love eventually crumbles. And is Martin as loyal as he seems?

The Common Pursuit is an accomplished production: the story has enough pace to have kept me engrossed throughout, the cast does a phenomenal job embodying the diverse characters and their evolving personalities, and the production skillfully portrays the changing eras with some nifty and minimalist variations in the decoration. The dialogue itself is a little acerbic, and while I enjoyed the play immensely, I left the theatre rather annoyed and wanting to give the playwright a bit of a slap, since I am a bigger believer in humanity. My only real criticism of the piece is that director Moises Kaufman has each actor play out a little too singularly their particular character trait, which while funny at times, makes them more predictable. This is especially the case at the beginning in the Cambridge dorms, where each character seems to want to introduce themselves to the audience by over-emphasizing what best describes them.

Anglophiles rejoice, this play has plenty for you to waddle in what’s good and stereotypical in England. While the acting is better than the accents, The Common Pursuit makes for an emotionally charged and highly enjoyable evening, which will have you talking about it for hours afterwards, and that indeed is a sign of a jolly good show.

(The Common Pursuit opens at The Laura Pels Theatre in the Harold and Miriam Steinberg Center for Theatre, 111 W. 46th Street. Performances are Tuesdays at 7:30PM; Wednesdays at 2PM; Thursdays and Fridays at 7:30PM; Saturdays at 2PM and 7:30PM; and Sundays at 2pm. Tickets are $71-$81. To purchase tickets visit Roundabout Theatre website or call 212.719-1300.)