By Sam Shepard and Patti Smith; Directed by Leah Benavides
Produced by One Old Crow Productions 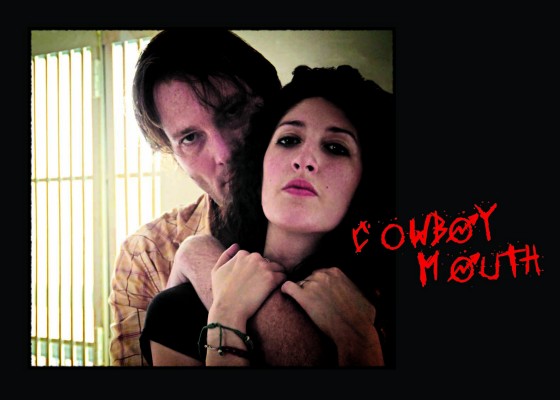 BOTTOM LINE: Cowboy Mouth is a bizarre, random, creative but uneven theatrical outing which benefits from its site-specific setting but suffers from a wonky script.

On my walk to a studio space above Lucky Cheng's on the Lower East Side, I receive the following email on my iPhone: "You will see a Lobster Man on the southeast corner; take a fortune cookie from him, which will give you directions to Slim and Cavale's apartment." This message pretty much sets the stage for the unusual production about to overwhelm my senses.

Cowboy Mouth, written in 1971, was born out of a relationship between playwright Sam Shepard and musician Patti Smith. The plot -- and I use that word generously -- follows an evening with Cavale (Diana Beshara) and Slim (Geoffrey Pomeroy), the musician she's kidnapped. Apparently, as the program notes, she has dreams of making him a rock-n-roll superstar. This detail of the story, however, loses almost all importance as the actors are forced to recite dialogue not fit for a play but for a poetry jam. The heightened, odic language so harshly divides the actors and the audience that there's no sense any of the acction is actually happening.

That's too bad because there's a compelling story buried beneath all the clutter. Imagine a drama about a man who's been kidnapped, leaving behind his child and wife, who can't decide if he wants to return home or remain a captive because his kidnapper is so enticing and free-spirited and wild. Not bad, right? Sadly, Shepard and Smith choose style over substance so the dramatic umph is barely noticed. Plus, the actors start up here in terms of intensity so they've got nowhere to go. Chemistry -- and the ups and downs in their relationship -- is missing.

As Cavale, Beshara's deranged qualities sometimes feel put-on, but her glowing pleasure when she announces fall as her favorite time of year registers as more genuine. As Slim, Pomeroy is more consistent but less urgent. His need for Cavale is not always clear or understandable. In fact, a few times I thought, "Why not just run out the door?" Coincidentally, the production lags with the entrance of a third character. When Slim and Cavale sit down the Lobster Man (Matthew Mark Stannah) to ask him a plethora of questions, it becomes a dive further into absurdity that teaches us nothing. With two crazies and a Lobster Man, nobody grounds the play in a palpable reality.

Leah Benavides does direct Cowboy Mouth as fruitfully as she can. In just over an hour, the actors bounce to and from the audience seating, the front door, the windows, the bed, all the while picking up, throwing and messing around with numerous props, items of clothing and instruments. Their constant motion enhances Slim and Cavale's chaotic relationship. Plus, the site-specific space is really perfect for the piece. The breeze through the windows. The real trees in the background. The sirens, the street noise, the beyond-drunk audience member. It all fits in the world of the play.

Benavides ably stages a faux-pas baptism scene in the play's finale that is the NYC-Artsy-Theatre-Scene defined. The three cast members powerfully unite during a five-minute sequence you can't take your eyes off of. As the Lobster Man becomes... less lobster, you realize that you'd never witness a scene like this on Broadway.

Ultimately, however, the script sinks the production. The characters far too often ramble about obscure things that they care about -- ranging from a river to the Ugly Duckling -- but that we don't. At the end of the day, Cowboy Mouth is as arbitrary and abstruse as this combination of three books littering the ground as I entered the space: Psychology of Women, Pinnocchio, Catcher in the Rye.

(Cowboy Mouth plays at the Salon Apartment Above Lucky Cheng's, 24 First Avenue through June 22, 2012. Performances are Mondays through Thursdays at 8PM; Fridays at 8PM and 10PM; and Sundays at 5PM. There is no performance on Monday June 18th and Tuesday June 19th. Tickets are $15 and can be purchased by calling 800.838.3006 or at www.brownpapertickets.com.)