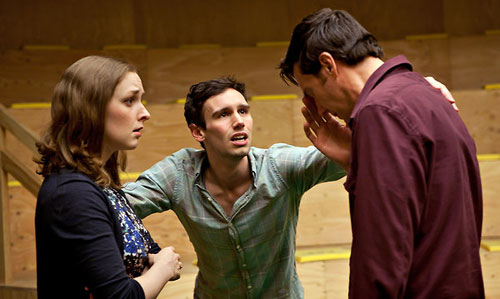 BOTTOM LINE: Cock is a strong play with a fabulous cast and superb direction.

Mike Bartlett’s Cock plays nightly for thrilled audiences at the Duke Theatre off Broadway. This American premiere of the Royal Court Theatre’s production of the new play is directed by James MacDonald and features Jason Butler Harner (The Coast of Utopia), Amanda Quaid (Equus), Cory Michael Smith (The Shaggs: Philosophy of the World), and Cotter Smith (Next Fall).

Ribald and silly, Cock is a tight, tidy, touching script neatly stamped by MacDonald’s undeniably superior direction. The casting is spot-on (props to Cindy Tolan Casting), and the show plays brilliantly, eliciting raucous and visceral reactions from the audience from start to finish. In fact, I have rarely seen an audience so uniformly invested and delighted; Cock is as good as they say!

Cock explores the unraveling love triangle that is created when John (Cory Michael Smith) sleeps with a woman (Amanda Quaid) while on a break from his boyfriend (Jason Butler Harner). John reconciles with his boyfriend, but cannot give up the other woman. All culminates when John has both his lovers to dinner to decide, and his boyfriend’s father (Cotter Smith) joins the party. Perhaps as an homage to his central position and the fact that the other three characters revolve around his decision, only the character of John is named in the play.

The script is masterfully executed for the production. The show is staged without props or “business” to clutter the dynamic relationships between each character. While setting and functional actions are expressed in dialogue, the actors do not bother to indicate activity. The action of the play is heightened above dishes and doorways — it’s a play about what is between these characters, and nothing else is on stage to distract. The direction reaches its peak in the love scene between Cory Michael Smith and Amanda Quaid: while the two talk through their first sexual encounter, they simply circle one another, getting closer and closer until they are just touching. It’s dynamic and erotic and evocative — a truly brilliant theatre moment. Cock is one of the best directed shows in recent stage memory.

As such, it is no surprise that the ensemble of actors far exceed expectations, holding the rapt audience in their nuanced performances. The ensemble is so strong, that the acting feels like a fantastic race, with all four performers operating in peak form, and each pulling ahead of the pack for a turn as the stand-out. Each actor brings an honesty and distinct charm to his or her respective role, and they play perfectly off one another. Harner is delightfully neurotic and desperately needy while Quaid, warm and lovely, brings a refreshing “every girl” quality. Cory Michael Smith achieves a charismatic feat of Olympian proportion as John, not only keeping the audience from alienating from him in a less than sympathetic role, but instead making the audience believe that two people could be so in love with him. Cotter Smith has the least to do in his part, but he makes the most of the stoddy, caring father role. The only real short-comings manifest in some lapses of dialect for Cotter Smith and in a lack of physical chemistry between Harner and Cory Michael Smith. As a whole, though, this is a stunning cast triumphing in a character-driven play.

While this is an exquisite script, there is a moment of drag in the denouement, but the power of the final moment erases that memory. This production is engrossing and highly entertaining, making up for the 90 minutes on a hard, wooden arena seat. Word to the wise: get a seat in the last row so you’ll have a back to lean against. Also, no late seating.