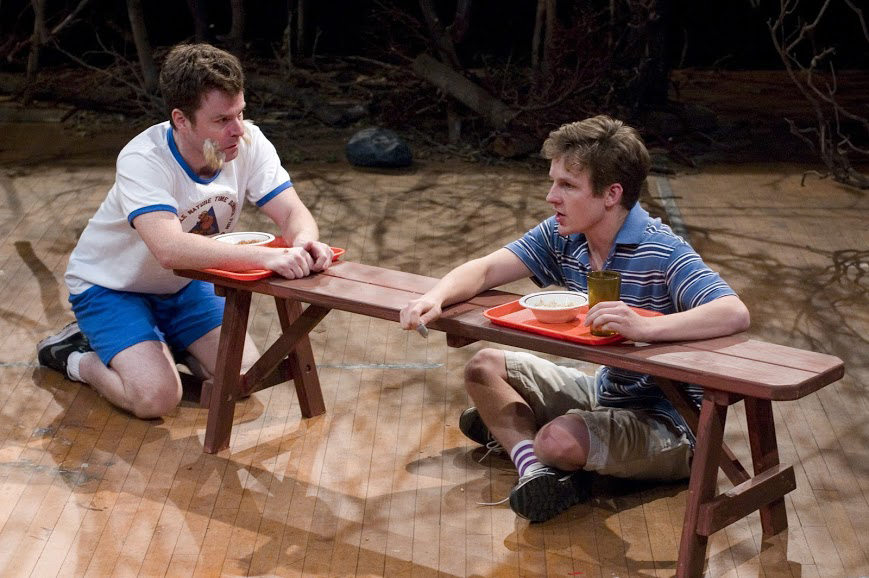 BOTTOM LINE: A coming-of-age story at the weirdest summer camp you'll ever visit.

Campers! Skadoodle over to Astoria because camp is now in session! Your counselors Becky (Dawn Luebbe) and James (Nicholas Urda) will be your buddies as you wait patiently for the play to begin. They'll ask your favorite activities and teach you the cheer. And that's all before you enter camp!

Once inside you'll meet the campers and learn that there's another new kid just like you. His name is Oliver (Seamus Mulcahy) and he is hoping that the summer brings about big change in his life.

The start of Billy Witch is uniquely immersive, but as the play gets going you settle in to observe the young teenagers -- at probably the most awkward years of ones life -- navigate the tricky waters of dating, friendship and growing up. This summer snapshot is a familiar one to anyone with camp experience: through crafts, swimming, and campfires, there is also much to be discovered about hooking up, making friends, and realizing who you are inside.

Playwright Gregory Moss allows the concept of teenagedom to manifest itself as a physical metaphor. When Miranda (a perfectly awkward Aimee Howard) gets to third base with Oliver, he gets squid ink on his hands. Thats because in her pants are budding tentacles and she's well on her way to becoming a full grown squid. By the end of the summer, a squirrel and a fox will be picked up by their parents, too. Watching Billy Witch, we realize that with growth comes change.

While Billy Witch melds fun with depth, its way too fun to be overly deep yet entirely too deep to be simply for fun. As a result we are left in that liminal world between real and make believe, or youth and adulthood in this case. And this allows for seriously creative staging, of which director Eric Pearson and choreographer Wendy Seyb take full advantage. The play includes a lot of live music, which provides a "Kumbaya" atmosphere with some rather expressive moves. The sound design (original music by Nathan A. Roberts) is also very playful...eerie music builds anxiety and broadly colors this sometimes suspenseful story. Billy Witch's creative team does remarkable work envisioning this magical world; it's not too far from reality, yet its nuances are distinct and imaginative.

The previously mentioned suspense comes from a scary story told around a campfire, about the legendary camp ghost named Billy Witch, an unlucky camper from thirty years prior, who still haunts the forest today. As we get to the bottom of this poor camper's demise, it turns out he has the answer to Oliver's search for personal change. He's not a bad ghost, he's just a weird kid too.

Through Billy Witch we are reminded of how much it sucks to be a teenager. Those of us in the audience likely didn't grow tails or scales or develop affinities for killing and eating live chickens, but we can still remember how freaking awkward growing up inevitably is. Though this play is inherently weird, fess up, you were weird once too.