Written and Directed by Bob and Tobly McSmith 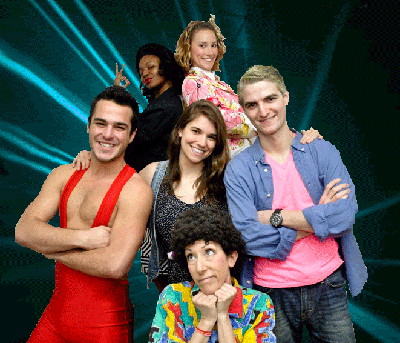 The cast of BAYSIDE: THE UNMUSICAL

BOTTOM LINE: Bayside: The Unmusical is a hysterical send-up to the deliciously campy hot-mess that is the '90s TV show Saved by the Bell.

Hey ‘90s lovers. Have you been living your life this past decade saying to yourself, “I sure miss that hot stud Zach Morris, with all his whacky schemes and random stoppage of time! And I miss that whiny Samuel “Screech” Powers, that gorgeous Kelly Kapowski, and the so-excited-no-wait-so-scared Jessie Spano! I want them back in my life!" Well, good news.The gang’s all back for a limited time only at the Kraine Theatre in HorseTrade’s consistently funny, thoroughly entertaining parody. Fair warning though: these aren’t the TV-PG kids we all knew and love. They’ve graduated to a hard-R for this engagement.

Writers/directors/musicians Bob and Tobly McSmith (three cheers for these triple threats!) have devised a clever concept that reunites our six drastically different best buddies from Bayside High. The Max, the favorite after-and-sometimes-during school hangout, is in jeopardy of closing and Zach et al must raise -- gasp -- $500! Pronto! It’s a ludicrous story that totally fits the ludicrous songs, dialogue and performances. This cast is spot-on in pinpointing the bizarre, creepy, unintentionally comic character quirks that we all wanted to laugh at in the ‘90s but we were too taken by how hip and cool this show was to really notice.

JD Scalzo charmingly hams up Zach’s suaveness. His signature “time-outs” are given a shockingly vulgar edge that set the raunchy mood of the night. Shamira Clark plays Lisa just as you remember her... until she breaks out into a rap against white people, a true highlight. And Rachel Witz nails Screech’s vocal patterns and dim-witted observations, although at times poor diction gets the best of her.

But there are two main reasons you need to put a night aside, head to the LES and see this musical: Israel Vinas and April Kidwell. Their portrayals of Jessie and Slater are killer. Vinas is deadpan (observe him nonchalantly mispronouncing ‘label’ and ‘college’), over-the-top (observe him nearly making out with BFF Zach) and everywhere in between. It’s a committed, bold, outlandish performance that made me want to see what else is in Vinas' repertoire.

And April Kidwell. Oh April Kidwell. This quirky, witty comedienne ends up stealing the show by getting in the car that is Jessie Spano, putting it in overdrive and never looking back. Using her full body and voice, she fills every single moment with a manic, caffeine-addicted energy that's perfect for Jessie. She also saves an otherwise dull pageant sequence by simply popping her head from behind the curtain. That’s right. The literal appearance of her face made the audience cheer. That’s talent.

Besides a monotonous interpretation of Mr. Belding that wears thin and some lackluster dialogue here and there (mainly for Zach -- the McSmiths don’t push his character as far as the others), Bayside: The Unmusical is a well-directed riot that anybody who’s seen SBTB should attend.