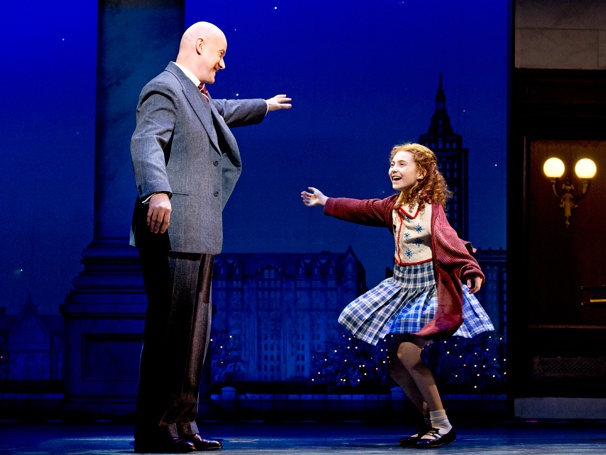 BOTTOM LINE: In the most recent revival of this well known musical, Act One soars while Act Two bores.

Of course there are a few exceptions to the bottom line I've devised above, but speaking generally, Broadway’s latest revival of Annie starts off as a fast-moving train and concludes as a horse-drawn carriage -- a carriage drawn by a horse who’s too tired to move because he’s eaten too much. As this is a musical whose main audience will be families and children, I noted the reactions within the row of kids sitting directly in front of me. And, well, they seemed to agree. Silent and on the edge of their seats during the appealing first act, they ripped up water bottles and “had to go to the bathroom” during the second act.

That its latter half is weaker is not entirely the production’s fault, but a writing issue as well. In its first half lie the musical’s best numbers, the introduction to a handful of exciting characters, and a compelling conflict which brings Annie the orphan to and from (and to) the municipal orphanage run by a mean middle-aged drunk.

The show kicks off in New York City, 1933. We meet Annie (Lilla Crawford, who no matter what a critic says of her acting can sing her butt off) and her ragtag group of orphan friends. They lament about their crummy, twisted orphanage (“Hard Knock Life,” lively although dully choreographed by Andy Blankenbuehler) until an unexpected visitor appears in the form of Grace Farrell (a very fine Brynn O’Malley). She’s here to select a child to spend the holidays with renowned billionaire Oliver Warbucks...and guess who she chooses? Spoiler alert: it’s not Tessie (Junah Jang). Actually, Tessie has some of my favorite lines in the show, which are completely lost as director James Lapine has the other orphans trample all over them.

But I can overlook that detail and I can even ignore a far too broad interpretation of Miss Hannigan by the often brilliant Katie Finneran. Finneran’s subtle moments (see: the quiet, almost frightening, wind-up in both her vocals and her body during “Little Girls”) are far more convincing than her shticky moments that register as mechanical (see: falling off a desk when Grace delivers bad news).

The good news is that Act One typically buzzes along at just the right pace. Its gorgeous storybook set pieces designed by David Korins whiz in and out between scenes, mirroring Annie’s new adventure. “I Think I’m Gonna Like it Here” is a particular high point, and where Lapine’s direction and Blankenbuehler’s choreography are sharpest. And it’s a joy to see Crawford’s Annie so hypnotized by Warbucks’s lavish lifestyle. Crawford has genuine chemistry with the perfectly cast Anthony Warlow. The two make a fabulous duo; the mere sight of them together -- he so tall, she so small -- is adorable. They really take each other in, while the Annie/Hannigan dynamic feels underdeveloped.

It’s not just the sight of Warlow that works. His acting is outstanding. He doesn’t simply go through the motions; it’s a performance that’s all heart and no shtick. He never pushes for the laughs, yet they come. Take, for example, a scene in Act Two where he does a less than stellar job reading off cue cards at Burt Healy’s radio show. We laugh because Warbucks is actually trying to read cue cards, not because Warlow is trying to make an audience laugh.

Sadly, the rest of the act is slow. Crawford’s thick Brooklyn accent proves more distracting than resourceful, there’s no real conflict at hand, and the blocking is iffy (the “Maybe” reprise could’ve struck an emotional chord but instead we are concentrating on the grand staircase Crawford is forced to walk down the entire song). So why d-r-a-g out a scene in which “Annie’s parents” -- really Hannigan’s brother Rooster (played with a sly subtly that works by Clarke Thorell) and his girlfriend Lilly (J. Elaine Marcos giving a truly perplexing interpretation) -- come to pick up Annie? The audience knows these people are not really Annie’s parents. There’s no dramatic tension here and it’s impossible to create it out of the blue.

It’s also impossible for me to leave Annie on bad terms. From a marvelous production I saw summers ago at Millbrook Playhouse to one I just directed with the kids of Camp Canadensis in PA, this charming show resonates with me. Times are tough; this is a bright, cheery musical that marches towards an inevitably happy ending. This version has well-cast children living out their Broadway dreams every night. And there’s a cuter than ever, well-trained dog bound to get "Awws" of his own. And there’s Anthony Warlow, who hilariously ends the evening’s proceedings by attempting to sing a carol with the children of the orphanage.

Is this everyone’s cup of tea? Probably not. Will you feel good about life if you end up choosing it? Probably. Will children like it? Mostly. But their water bottles sure won’t like Act Two.