Written and Directed by David Mamet 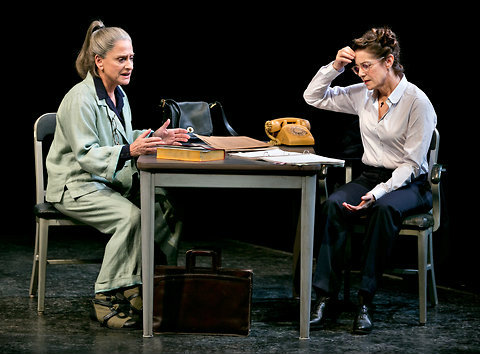 Patti LuPone and Debra Winger in THE ANARCHIST.

BOTTOM LINE: A jailer and her long-imprisoned convict engage in a political argument concerning her parole; but it is more debate than theatre.

David Mamet seems to occupy at least one Broadway theatre per season these days, and this year is no exception. In fact, presently, he has two plays sharing the great white way: Glengarry Glen Ross, which is now recycled on Broadway as often as Mamet’s name is recycled on marquis, and his new play The Anarchist, which will enjoy a much shorter stint this season, having already announced its closing date for December 16th, only a couple of weeks after opening. One imagines Mamet greeting the news of his newest work’s nearly immediate closure, with a long string of expletives, which could fit any number of his profanity-loving characters. However, those characters do not exist in The Anarchist — amazingly, I do not recall the utterance of a single F-word, but this is not the reason for the production’s collapse. The Anarchist is not so much a play, as it is a socio-political argument, mired in theory, and mouthed by actors.

Set in a prison office, Cathy (Patti LuPone) has served thirty-five years of her life sentence, which she earned by shooting and killing two police officers in a bank robbery carried out by a political organization. Ann (Debra Winger) has been her jailer/parole officer for the duration of this time. If Cathy’s crime was devoid of anarchistic intent, then she would customarily have been paroled by now; however, she must convince Ann that she has been rehabilitated if she hopes to be a free woman again.

The play itself does not come across as a high-stakes meeting where one’s freedom is at risk; instead it reeks of heady intellectualism devoid of passion and feeling. The two women bounce their arguments off one another as though they are scholars caught in a debate, invoking the words of Marx, Rosseau, and other prolific theorists to give their plaints weight. However, their sparing has the opposite effect, and the play’s academic feeling robs the characters of any chance to appear human; thus their renderings are pencil-thin and easily erased upon departing the theatre. Cathy claims to have been reborn through Christ, and uses this as her primary reason to be released. Her motive feels transparent and implausible when mixed with her cold and heady dialogue, and it is. Both women seduce each other down a trail of deceit, but their falsehood is too obvious to either convince or captivate.

Regrettably, Mamet is not able to bring this production to life as director either. The brief seventy-minute play never gathers sufficient steam to build any intensity. The show reaches its highest point of energy when the two actresses appear on stage and receive their entrance applause. After this, the evening plateaus and becomes static. The dramatic pitch is one long note, and the only interruptions from this monotone are the numerous coughs from the audience. Furthermore, since the play does not manage to rise or fall, it is all too easy for the audience to become lost in the rhetoric — it’s as though one is speed-reading Marx’s Communist Manifesto, and still expects to glean all the complexities of the text. What is probably intended to be a whirlwind night of theatre falls short so that when the "shocking" ending moment happens, there is no impact. The lights come up, the actresses bow, and one thinks: "I guess that's all..."

One of the undeniable draws for audiences to attend this production is the presence of one of the reigning queens of Broadway, Patti LuPone, who shares a long history with Mr. Mamet (juicily discussed in her memoir). Her performance exhibits a subtlety and restraint that is freed from her stereotypical mannerisms. She sacrifices her usual flash and theatricality, and delivers an understated performance that exhibits her wide acting range. The only LuPone-ism she clings to is her crisp diction, and we are grateful, for without it we might give ourselves permission to tune out the dialogue. Those who expect to see her co-star Debra Winger anchor the acting of the piece while LuPone chews the scenery, will be in for a somewhat pleasant surprise. But while LuPone shows us the true range of someone with “star quality,” Winger drops the ball, performing with an unaffected disposition, and barely adding any believable force to her more weighty lines. With Winger as the jailer, LuPone should have walked ages ago.

Ultimately the play is not served by being on Broadway. Were The Anarchist confined to a smaller black box theatre, the dramatic action might come to a boiling point; but here, even the intimate Golden Theatre feels cavernous, and any sparks which could fly, merely fizzle out into the abyss of the Broadway house. Nevertheless, even if the production was loaded with more intensity, there would still be Mamet’s know-it-all script to answer for, which works better as an argument than as a play. As the famed theatre critic Walter Kerr put it: a play which is “no more than an argument generally loses the argument.”