$25 in advance,
or pay-what-you-can at the door

By Glyn Maxwell; Based on the play by Aeschylus; Directed by Amy Wagner
Produced by Phoenix Theatre Ensemble

Off Off Broadway, Play Adaptation
Runs through 4.1.12
The Wild Project, 195 East 3rd Street 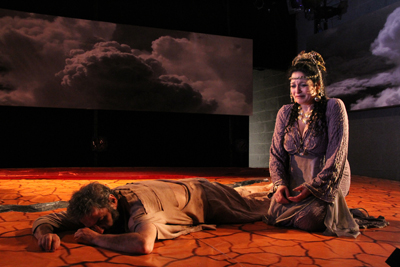 Upon entering the theatre, I was immediately struck by the set: the playing space is enclosed by stormy cloudscapes surrounding a cracked desert floor split by a rivulet of blackness — maybe tar? Maruti Evans’ piercing set design is matched by his nuanced yet dramatic lighting, both ethereal and confrontational in turn. The design is completed by Margaret McKowen’s rustic costumes and sounds design with original music by Ellen Mandel that includes audio ranging from ocean noises to music with a sacred slant.

Maxwell crafts a lovely script, well-staged and expertly actualized by Wagner. Agamemnon Home draws on facets of Greek form, including the prologue and agon, the use of singing, and a chorus. But Maxwell builds from these original structures in rethinking Agamemnon and adds contemporary context. Most interesting is the exploration of Iphigenia, specifically how she is politicized by the government and her death become propaganda. There is also a parallel of Iphigenia and Cassandra, bringing these two tragic characters into focus against one another. The script uses sound of language brilliantly with its mix of overlapping dialogue and song.

Maxwell and Wagner take full advantage of an anti-war element inherent in the story. Agamemnon’s tale is the ultimate example of an individual’s violent acts coming home to roost, a theme that resonates through the lives of all in the family (Electra, Clytemnestra, Pelops, Atreus, etc. until Orestes is granted clemency and ends the cycle). Clytemnestra and the Survivor are also given beautiful language in this version deriding the costs and consequences of war (and violence) and of how to past compares to the present, how expectation meets reality.

Perhaps because the cast is drawn from a preset company of actors, the ages are sometimes fudged, but otherwise the piece is well cast and features stunning performances. In supporting parts, Craig Smith is dynamic as the Watchman, highlighted by a mesmerizing ten minute speech, and as the Survivor, Josh Tyson conquers the stage from his very entrance, providing a tour de force scene. Kelli Holsopple is stately and statuesque as Cassandra, and Amy Fitts sets herself apart with a Bette Davis-like control of her performance. Elise Stone presents a grand, grounded rendition of Clytemnestra, contributing an air of dignity and a strong command of her voice.

The major caveat to this production is that it requires familiarity with the history. If you don’t know the story of the House of Atreus and the Trojan War, it is difficult to follow this script (as an exiting audience member pointed out). The text and action also draws resonance from an awareness of the details. In this way the show again follows the Ancient Greek tradition where the audience would have already been familiar with the narrative being dramatized. Phoenix conveniently includes the backstory in the program, though, so you can always come early and brush up before the show.

This is an interesting and beautifully wrought rendition of one of the core classics in Western literature. It’s a treat for lovers of Greek drama.

(Agamemnon Home plays at The Wild Project, 195 East 3rd Street between Avenues A and B, through April 1, 2012. Performances are Tuesdays through Saturdays at 8PM, Sundays at 3PM. Tickets are $25 in advance or pay-what-you-can at the door and can be purchased at www.PheonixTheatreEnsemble.com or by calling 212.352.3101. TDF Vouchers welcome.)