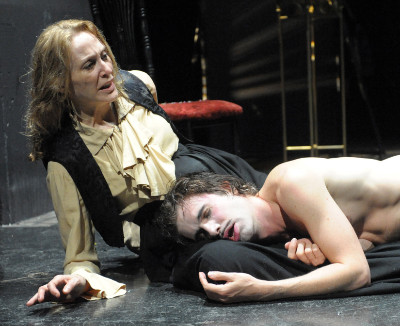 BOTTOM LINE: Victory is an intelligent, intrepid play with brilliant costumes and an extraordinary ensemble of actors.

Victory is set in 1660 during the English restoration. Cromwell is dead and King Charles II has been brought back to England and restored to the throne. The widow Bradshaw (Jan Maxwell) discovers that by the King’s order her husband has been exhumed and the body desecrated for his part in the overthrow and execution of King Charles I. Bradshaw must travel to the corners of the Kingdom to collect his body, braving the chaos of the recently redirected peasants and a new influx of aging cavaliers. Meanwhile, at court, King Charles II grapples with the now less powerful status of the English monarchy and the politics of maintaining authority while appeasing the influential men who are responsible for his restoration.

Victory is a beautiful, dramatic, epic play staged with elaborate and articulate direction by Richard Romagnoli. The language is poetic yet gritty: Barker’s texts and characters are raw, daring, and winning. In the world of Victory, it is not a matter of good and evil, for everyone does wrong and right, everyone is both cruel and persecuted, and everyone has a perspective. There is also a fascinating exploration of what revolution means, showing coups as merely a reallocation of power.

The cast, led by Maxwell, is an exceptional ensemble of supremely talented, energetic performers. The director in his note describes “visceral intensity,” and this approach pays off. As Ball, Robert Emmet Lunney gives a complex, subtle performance. David Barlow’s King Charles II is a heart-breaking clown, and yet also riveting, sexy, and repugnant. Michaela Lieberman is charming and dramatic as Devonshire, the King’s abused, neglected, spoiled mistress. As McConochie, Willy McKay is hilarious and easy on the eyes. And Maxwell anchors the show with her mesmerizing portrayal of this desperate, broken, and yet powerful woman on a great, life-changing journey. You can’t take your eyes off her. When her powerful presence meets playwright’s Barker’s vibrant speeches, nothing more is needed.

With so many shows in rep or part of festivals these days, I do miss seeing an honest to goodness set outside a mainstage venue, but scenic designer Hallie Zieselman does an admirable job innovating various locales and coordinating with lighting designer Mark Evancho to create a meaty world where this rich work can reside.

Carlie Crawford and Jule Emerson astound, however, with their punk period costumes. I’m surprised it only took two people to put together so many daring, playful looks for a full ensemble. There is a leopard-print gown that Michaela Lieberman wears for the first half that I would pay money for. The whole visual is fantastical and fantastic!

This is a spectacular play, divinely performed, and fabulous to look at. Victory is smart, salty, and stupendous.