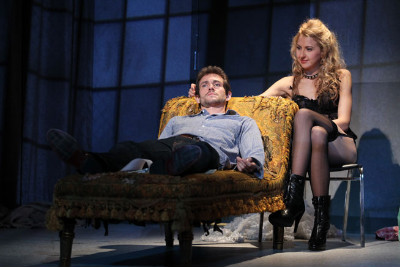 Hugh Dancy and Nina Arianda in Venus in Fur. Photo by Joan Marcus.

BOTTOM LINE: A terse and titillating two-hander, telling a tale of sexuality and gender power-play in life and work.

Though fairly well-trodden material, the exploration of the actor/director relationship usually serves to be an interesting one, due in great part to the overall parallel of acting for pay and acting in life. David Ives's spirited new play, Venus in Fur, now playing at MTC's Samuel J. Friedman theatre, is the latest addition to that subject area.

One dark and stormy New York evening, frustrated playwright-cum-director, Thomas, calls his significant other to complain about the thirty-five girls he’d auditioned that night, not one of them right for his precious lead role of Vanda, in the play he’s sure will be his first success. The piece, aptly titled Venus in Fur, is one about love and domination in the 19th century, based on a book of the same title penned by the father of Sado-Masochism. No sooner does Thomas hang up the phone and begin to pack up his things to vacate the dismal audition room, when the woman he’s been waiting for rushes through the door. Of course it is in no way apparent at first that she’s the one -- her nasal vapidity and cheap S&M get-up (to get into the role; the play is basically porn, right?) scream otherwise, as does her use of the selfsame contemporary colloquialisms Thomas had just been lamenting (like, whatever). But as soon as the persistent girl, who happens to share the name Vanda, convinces him to let her audition and begins to read, it becomes apparent that there is much more to this loud, leggy blonde than meets the eye. Becoming more and more captivated by each other and the power play of the script, the extended audition stretches into the night, and the line between Thomas and Vanda and the characters they perform dissolves into the thick air of the cell-like audition space, like so much steam from a hot shower.

David Ives’s script is sleek and smooth as patent leather, with equal portions of sharp one-liners as cultural observations. But he veers off course when he does not take his own advice, as delivered by Thomas the playwright, and focus on larger issues than settling for the trivial, topical issues that “diminish” us. The power lies within the manipulative and scintillating actor/playwright/director relationship and battle for autonomy from the “characters” we play, in life or otherwise. When Vanda begins picking apart Thomas’s life, the play loses momentum and emotional resonance; she becomes a nit-picky home wrecker that Ives seems convinced is the ideal of a woman, as opposed to the electrically and simultaneously vulnerable and powerful woman playing a character vying for the spotlight against a man doing the same, and both becoming entangled in the net of narcissism they’ve created together. Suffice to say, Ives’s script is a multi-layered manifesto, with some layers more commanding that others. (Thanks to the play-within-a-play scenario, though, Hugh Dancy, as Thomas, delightfully gets to call his very own posh English accent “idiotic.”)

It can certainly be said that this two-hander is smart and sexy, helped by Walter Bobbie’s natural and easy direction. Dancy and Nina Arianda, as Vanda, offer performances that are downright captivating; with chemistry abound and true to their characters, it is often hard to choose which actor most deserves the attention at any given moment. John Lee Beatty’s white box set beautifully and naturalistically holds the action, while simultaneously evoking other psychological playgrounds similar white boxes contain.

Though the actor/character, actor/playwright/director relationship is certainly not an underexplored one, Ives’s Venus in Fur is a compelling addition to the conversation.

(Venus in Fur plays at the Samuel J. Friedman Theatre, 261 West 47th Street between Broadway and 8th Avenue, through December 18, 2011. Performances are Tuesdays at 7PM; Wednesdays at 2PM and 7PM; Thursdays at 8PM; Fridays at 8PM; Saturdays at 2PM and 8PM; and Sundays at 2PM (additional Monday night performance on November 21st at 7PM; no performance on November 24th). Tickets are $67-$131 and are available at telecharge.com or by calling 212.239.6200.)