Through a Glass Darkly

By Ingmar Bergman; Adapted for the stage by Jenny Worton; Directed by David Leveaux
Produced by Atlantic Theatre Company 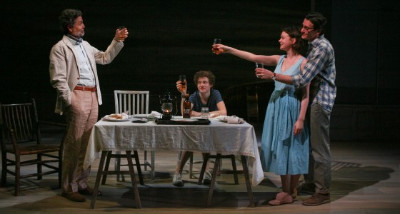 The cast of Through A Glass Darkly. Photo by Ari Mintz.

With summer finally getting in gear and holiday escapes on the books, bathing suits and sunscreen aren’t the only things filling up suitcases. The Atlantic Theater Company’s production of Through a Glass Darkly, now playing at New York Theatre Workshop, firmly points out the innate inability to leave looming problems at home when vacationing.

Bergman’s 1961 screenplay, finely adapted for the stage by Jenny Worton, tells the story of Karin (Carey Mulligan), a young woman teetering on the psychological point of no return while summering at a vacation home with her husband Martin (Jason Butler Harner), brother Max (Ben Rosenfield) and father David (Chris Sarandon). The small family unit oscillates around Karin, each member needing her for their own reasons: her husband, the doctor, to be able to give his undying, unending love and attention to; her brother, to have as an advocate and push to further connect with their father; and her father, as a challenging reminder of his wife, who also suffered from a psychological imbalance. As the summer days and insomniac nights draw on, though, the strain from the dysfunctional family trip takes its toll on Karin, with her psychoses piling up until her manic actions demand professional intervention.

The world of the play very much feels Bergman’s other work, displaying a highly literate and intellectual family who, despite their ability to articulate their issues with one another, are nonetheless just as dysfunctional as ever. This case is overstated by Karin’s father: he is a flailing writer with one successful novel from years ago and nothing impressive since, who allows his need for success to overshadow his familial obligations. The tension between desire for success and inescapable self-loathing has so deeply imbedded itself into him, that he simply has no ability to offer love and support to his disintegrating family, which is all the more faltering due to the lack of paternal influence.

Karin’s little brother, Max, has heartbreakingly attempted to rekindle a relationship with his father by fashioning himself a writer as well. So miserable is his father, though, that instead of Max finding commendation, he succeeds in raising David’s guard. Evoking Chekhov’s The Seagull, Max becomes like the ultimately doomed Treplev. He similarly fails to garner parental praise because he has succeeded in stirring an unspoken jealously David despises himself for having, though fails to overcome.

The deep dysfunction that’s endemic to this family explores the limits and boundaries of unconditional love, as well as the evolution of familial relationships, particularly between maturing brothers and sisters, that can be the cause of further rifts. Karin and Max’s desperate need for their father stunts his ability to respond. Their needs are simply too overwhelming for, and also signify David's further failure in not raising them to be competent without him.

The turning point in Karin’s psychosis comes from a vision she has, complete with manifold voices in her head, which offers her a new understanding of God and her purpose. Though Bergman’s title is a reference to a biblical passage, the world of the play, like the Swedish culture it came out of, feels stolidly secular. Karin’s downfall is all the more vivid, then, with this sudden jarring lurch into a form of religious awareness heretofore only existing in a void. Her psychological disorder now draws in with it images of fundamentalism and piety that vividly contrast with Karin’s childlike fragility and naively overt sexuality that had pervaded the story prior.

David Leveaux beautifully directs the stellar four person cast. Mulligan’s Karin confidently upholds her place as the play’s touchstone; her large brown eyes (that are prominently displayed on the production’s poster) are seldom, if ever, seen without a tinge of red and weight of weariness. Takeshi Kata’s lovely and stark set aptly allows ample room for the drama, a delightful contrast to the naturalistic and often sumptuous, image-heavy world in which Bergman usually operates, though no less supportive of the material. In conjunction with David Weiner’s lighting and David Van Tieghem’s sound the world is clean and clear, and Karin’s moments of revelation are utterly moving.

While certainly not a cheerful and light-hearted summer fluff piece, the cool, damp world of Through a Glass Darkly is still a satisfying respite.

(Through a Glass Darkly plays at New York Theatre Workshop, 79 East 4th Street, between 2nd Avenue and Bowery, through July 3, 2011. Performances are Tuesdays at 8PM, Wednesdays at 2PM and 8PM, Thursdays at 8PM, Fridays at 8PM, Saturdays at 2PM and 8PM and Sundays at 3PM. Tickets are $65 and are available at ticketcentral.com or by calling 212.279.4200. For more show info visit atlantictheater.org.)