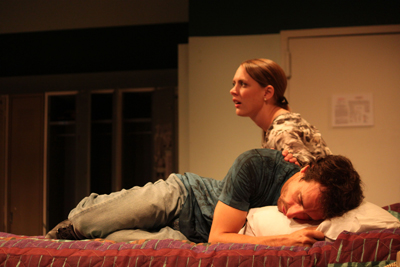 BOTTOM LINE: A well-designed set, skilled director, and convincing cast give life to this revival which examines the questions of memory of perception.

Knife Edge Productions, in association with Swinestars Productions, is presenting a revival of Stephen Belber’s acclaimed work Tape. Considering that the play is by now relatively well known, and was even produced as a film in 2001 starring former couple Uma Thurman and Ethan Hawke, it gives this production the chance to imbue its own unique interpretation upon the work. Following the film version of the play, in 2002,  Belber also staged a well received revised version of the work in New York which includes a prologue and epilogue showing the characters at three different ages in their lives. This production however, sticks to the original script.

The play centers around three former high school friends who reunite in Lansing, Michigan. Jon (Neil Holland), now a filmmaker, has come to Lansing to show his film as part of a festival. His friend Vincent (Don DiPaolo) claims to be in town to support Jon, who comes to pick him up for dinner at the dingy Motel 6 where he is staying. While Jon appears to be the self confident golden boy, Vince is a disheveled mess, working as a small time drug dealer and volunteer firefighter in California. When Jon arrives at the hotel, Vincent postpones the dinner plans, plying him with marijuana and beer. While first the two engage in play fighting, back slaps, and jokes, all the hallmarks of heterosexual male bonding, Vincent soon drives the conversation towards that of Amy, a former classmate. Apparently Jon and Vincent were both involved with Amy. Vincent was Amy’s long term boyfriend, whereas Jon engaged in a prolonger flirtation that resulted in a sexual encounter.

Vincent begins teasing Jon into confessing that he in fact slept with Amy and that perhaps just maybe it might not have been completely consensual. Jon laughs off the accusation, but as the pressure continues admits that he perhaps “linguistically coerced her.” As Vincent interrogates him further Jon finally gives in, shouting a confession that his encounter with Amy might have fallen within the lines of date rape. Vincent manically snorts lines of cocaine off the hotel desk and reveals that he has been in touch with Amy. She soon appears at his door under the false pretext of dinner. While she initially seems innocuously friendly, facades break down as Vincent and Jon attempt to excavate the truth. Vincent seems to believe he is on a moral crusade, trying to play hero to Amy. However, it soon becomes clear that Vincent in fact is digging up the past as revenge against Jon.

As Amy, Therese Plaehn is a little less than dark, without quite as much of a sarcastic tinge to her initial state of doe-eyed pleasantry than has been shown in previous productions of the work (including Uma Thurman’s portrayal in the movie). This makes the play’s eventual concluding events more surprising, but also causes a bit more confusion, leaving the audience to make more of its own assumptions regarding just what might have happened that fateful night. (This change in delivery could be credited to Sam Helfrich’s direction). DiPaolo seems older than his character (who according to this version of the script is supposed to be 28 years old), but nonetheless authentically captures Vincent’s dishevelment and desperation. Holland also convincingly conveys his character’s anger and inner conflicts. The two layered set designed by Laura Jellinek manages to authentically capture both the feel of a dingy hotel as well as a high school locker room. The production, in the end, convincingly conveys the script’s central conflicts of perception, memory, and true motives.

(Tape plays at June Havoc Theatre in the Abingdon Theatre Arts Complex, 312 West 36th Street, through September 24, 2011. Performances are Wednesdays through Fridays at 8PM, Saturdays at 2PM and 8PM, and Sundays at 2PM. Tickets are $18 and are available at tapeNYC.com or by calling 866.811.4111.)