$20 rush: cash only, one hour before the performance 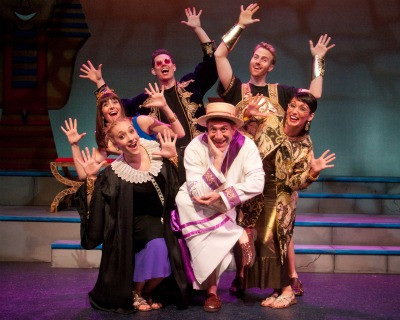 BOTTOM LINE: An energetic, screwball parody that makes for an evening of pure joy and refreshing entertainment.

In order to fully enjoy the delightful new musical The Sphinx Winx, you only need to know the roughest outline of history. During the time of Julius Caesar, Cleopatra VII was once a vain queen of Egypt who was in love with Marc Antony. Political intrigue occurs and tragedy follows as both commit suicide, Cleopatra by an asp. The Sphinx Winx takes a sharp left turn from its source material here and never looks back, getting a lot of mileage out of playing against these audience expectations.

Cleopatra, played elegantly, if not histrionically, by Erika Amato is a slightly-past-her-prime queen, bored with her doting and lecherous husband Julius Caesar, the Roman governor of Egypt. It seems the coffers are running low as the Soothsayer, played with comic talent by the rubber-faced Ryan Williams, kicks off the high-jinx by reporting that a man will be arriving soon, one whom Cleopatra assumes will be her new plaything. It turns out that a barge is arriving that very day carrying Antony. He has arrived to investigate why Egypt has not been paying its monthly taxes to Rome. Upon laying eyes on Cleopatra’s stunning handmaiden, Crecia, he promptly falls in love with her. What ensues is a screwball comedy of Cleopatra pursuing Antony, Antony pursuing Crecia, and Caesar dodging the investigation (clearly he’s been up to something). Complicating matters is Lunia, Caesar’s daughter cursed with a tin ear and, much to everyone’s dismay, a penchant for singing or rather screeching . . . loudly. She will do anything for attention including sabotaging Antony and Crecia’s love.

Stylistically, this musical is all over the place. The Sphinx Winx was originally written and performed in 1952, and then, until recently, largely forgotten. Since then it has been resurrected, cut down from three hours and twenty four actors to ninety minutes and six actors. Some songs were removed, some were added, the script was reworked and the entire thing was injected with a healthy dose of twenty-first century. What emerges is a strange mix of golden age musical, Burlesque hall slapstick, good natured lampooning and pop culture references. Whatever it is, it’s working for me. In his program note director Matthew Hamel writes that he is trying to capture a Burlesque style that is absurd, using pastiche and parody. He has achieved this successfully to great effect and the audience is in for a treat.

References to American Idol, Law and Order, Sarah Palin and General Petraeus pepper the play without feeling political or mean-spirited. The overall feel of the play retains an older sensibility though and any minute you expect Phil Silvers or Zero Mostel to join in a routine. This is where The Sphinx Winx finds its real charm--its homage to old vaudeville schtick and music hall elegance. There is a beautiful number in which Antony and Crecia share a dream sequence dancing in white tails and evening gown as Fred Astaire and Ginger Rogers. There are sight gags and sound gags, one liners that will make you groan with a smile. The ensemble cast, each playing multiple characters, energetically keeps up the pace. The music is lively and jazzy and occasionally romantic. A bright and gaudy stage barely contains the cast, complete with a winking Sphinx. And really, this whole musical is one big smile and a wink--at the audience, at musical theatre, and pop culture. Never taking itself (or its source inspiration) too seriously, The Sphinx Winx says to just have fun, and brings to mind that classic song, "When You’re Winking (The Whole World Winx With You)."

(The Sphinx Winx plays at The Beckett Theatre at Theatre Row, 410 West 42nd Street between 9th and 10th Avenues, through June 19, 2011. Performances are Tuesdays at 7 PM, Wednesdays through Fridays at 8 PM, Saturdays at 2 PM and 8 PM and Sundays at 3 PM. Tickets are $56.25, $80 for premium seating, and can be purchased through Telecharge at www.Telecharge.com or by calling 212.239.6200. A limited number of $20 rush tickets are available at the Theatre Row Box Office, cash only, one hour before each performance. For more info visit www.TheSphinxWinx.com.)