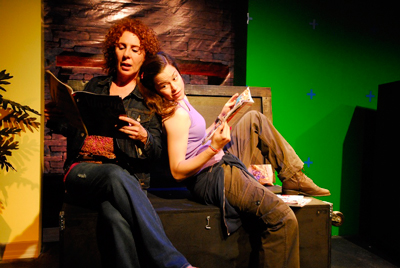 Dori Legg and Kally Duling in The Short Fall.

BOTTOM LINE: Cute and effervescent. Nothing earth-shattering, just good fun and some laughs.

The show opens with a TV crew preparing the stage for a shoot of some kind. The producers are furious that the talent is stuck in public transit, no one can remember the name of the craft services guy, and Tabby (Dori Legg) sneaks into the studio to pitch her story to the harried and frustrated producers (Karen Stanion and Ryan Reilly). Security can't be found to forcibly remove her, so the producers (in a fit of boredom and frustration, perhaps) allow her to begin her tale, and that's when the real show starts.

Tabby and Lloyd (Ron Bopst) are married. They have an average income, an average house, an average teenage daughter (Kally Duling). They live in an average neighborhood in Average, USA. Everything about their lives is perfectly ordinary, until the day Lloyd comes home and confesses to embezzling from his company, and that his assistant, Lance (Ryan Colwell), has proof of his heinous crimes! Tabby, the brains of the family, orchestrates a meeting at the Red Lobster to persuade Lance to hold off on exposing her husband. After all, why expose someone of no importance? Tabby and Lance, driven by selfishness and greed, concoct a plan to elevate Lloyd (poor Lloyd) to new heights, and then, once Tabby enjoys the good life for a while, Lance will be free to bring him down and take his place. Its the perfect plan, so according to the laws of storytelling, it has to go horribly, awfully awry before the end of the show.

There's little to no real meat here with some easy themes. It's a vanilla flavored soft serve side dish of satire. But the show doesn't overreach, which I appreciate. It doesn't pretend to be anything other than what it is: a silly and humorous, winsome adventure with plenty of laughs and a few heartfelt moments here and there. This is the saving grace, the play is humble and doesn't try to illicit too much emotion. It just wants to be enjoyed, and to that I say: well done, show!

However, the script is a tad uneven. Some scenes are true satire; fast, funny and furious, and some scenes are not any of those things. Playwright David Caudle is sometimes guilty of too much dialogue, the abundance of words slows the pace of the show, and the funny falls apart when the actors have to stumble through too much exposition. I also don't see that the framing device of the TV shoot and producers is necessary, as I very much cared about what was going to happen to Tabby and her family and I did not care at all what the producers thought about the relative sexiness/truthfulness of the story Tabby tells. Yes, the framing device is amusing, and it kicks off the show in a dynamic and unconventional way, but when it came back to interrupt and re-establish itself, the show slows down and feels a tad self-important. A play commenting on itself has its place and can work wonders, but I don't think this is show for it. Tabby's story is the play.

The direction, by David Michael Holmes, is clean and sharp, and all the actors shine in wacky, off-the-wall roles. Special kudos to Karen Stanion and Ryan Reilly, who ably play multiple parts with enthusiasm and confidence. On a scenic note, I do wish the set would've allowed for crossover space for the actors, as watching them walk across stage to get to their marks was distracting, but I imagine that the realities of a sprawling set in a small theatre interfered. I'm sure the scenic designer is much more annoyed about the lack of crossover than I am.

The Short Fall falls short of satirical greatness (see what I did there?), but it's a fun, happy romp of an evening's entertainment. You will definitely enjoy yourself.