The Select (The Sun Also Rises)

Based on the novel by Ernest Hemingway; Directed by John Collins
Created by Elevator Repair Service 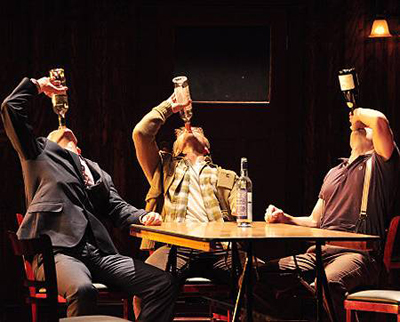 BOTTOM LINE: Inventive direction and a delightful cast make The Select an event worth seeing.

No one isn't a Hemingway fan -- at the very least it's hard to be critical of The Sun Also Rises unless we're talking serious literary criticism (which we're not, so back off English majors). Elevator Repair Service has found its "thing" in presenting classic literature on stage and theatricalizing the shit out of it in the process. They started a few years ago with The Sound and the Fury, then found stellar success with last year's Gatz (an all day event that included a complete reading of The Great Gatsby), and they now tackle Hemingway required reading. The Select is an adapted version of The Sun Also Rises, and the production clocks in around 3 hours. While that's still a commitment, it hardly feels like one. The Select is so much fun you wish the party would go all night.

For those of you who slept through high school English class: the 1926 novel takes place in Paris and chronicles American Jake Barnes (the adorable Mike Iveson) as he and his chums fight for the love of Lady Brett Ashley (the even more adorable Lucy Taylor). Between lots of drinking, lots of fraternizing, lots of flirting, a trip to Spain and a bull fight, Jake and Brett try to maybe make a relationship work despite the inevitability that it's probably not going to happen. She's got a thing for other guys, and well, seemingly all other guys have a thing for her.

All of this unfolds in The Select with the expected joie de vivre of 1920s Paris. And for the purposes of playmaking, that becomes a lesson in creativity. Tables and chairs transform into all sorts of objects as the actors play out visceral moments from representations. The action is slick throughout the play, seemingly choreographed to the nanosecond. With two dance numbers -- which are really dance parties turned production numbers since they involve the entire cast -- the energy soars and the actors are able to transmit a joy that's completely contagious.

A large contributor to the show’s uncanny realism, given its otherwise symbolic approach, is in its sound design, created by Matt Tierney (the actor who plays Robert Cohn) and Ben Williams (the actor who plays Bill Gorton). The soundboard sits on stage (I think there are two boards, actually), and the cues are executed by various actors from the stage. This is never distracting, and it took me a long time to realize they were even there, though they are revealed toward the end of the evening (a deserving nod). The sound itself is visceral, full, and relevant – it accentuates the production perfectly.

However, John Collins’ direction is the most remarkable component of the collaboration. The attention to movement, reverence for the characters, and methodological approach to the narrative come together for a production that epitomizes inventive storytelling. As Founder and Artistic Director of ERS, it’s clear that Collins is driving the bus. His storytelling approach is unique and nuanced, yet it’s hard to imagine this show being executed any other way. And I don’t mean to discount the production’s group efforts -- the talented and committed artists behind The Select are entirely in sync.

Not just for the literary-savvy, The Select is a celebration of storytelling. By merging the page with the stage, ERS presents an event that embraces Hemingway’s work in tandem with the creative world of theatre. This makes for a remarkably fun audience experience.

(The Select plays at New York Theatre Workshop, 79 East 4th Street, through October 23, 2011. Performances are Tuesdays at 7PM; Wednesdays at 12PM and 7PM; Thursdays through Saturdays at 7PM; and Sundays at 1PM and 7PM. Tickets are $70 and are available at ticketcentral.com. For more information visit elevator.org or nytw.org.)