Written and Directed by Duncan Pflaster 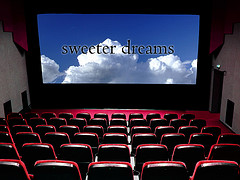 BOTTOM LINE: A theatre/film mash-up that shines a light on our entertainment industry compatriots on the West coast.

Duncan Pflaster’s new play, Sweeter Dreams, exposes Hollywood for its egregious commercial intentions. Incorporating multimedia projected on a big screen up stage, Sweeter Dreams offers nearly equal parts live action and filmed components. The projected videos include movie trailers associated with the characters, and also the background for a popular movie review TV show starring Roberta leFay (a Roger Ebert type -– if Ebert were a catty starfucker). The screen also shows images that pertain to dream recollection when a character digs in her memory to recall a kooky dream.

Sweeter Dreams follows a screenwriter and director named Luisa, a.k.a. “The Female Fellini” (Heather Lee Rogers), and her young stud “discovery” Brad (Scott Freeman). Roberta (Clara Barton Green) is not a fan of Luisa’s although she is quite fond of Brad. The rise and fall of the characters and their intimate relationships are the focal points of the action, although all are professionally successful in their own right, and marital discretions are basically overlooked. Luisa’s husband Thomas (Douglas Rossi) is the counterpoint to the Hollywood narcissism, as he has a normal job and doesn’t subscribe to the limelight indulgence.

Although the cast includes only 4 actors, the several movie trailers that are shown throughout the play include a dozen or so others. The videos are a nice addition to the story, offering a constant reminder of Hollywood’s bombardment into popular culture -– and how hard it is to make it in the industry.

I assume this play sets out to lampoon Hollywood, although its realistic and almost sentimental scenes involving the humble Luisa and surprisingly down-to-Earth Brad give an entirely un-satirical perspective into these “types.”  The only outlandish character here (in a decidedly outlandish industry) is Roberta, and that could totally be due to Green’s sassy, humorous characterization. Additionally, the movie trailers seem like parodies of Hollywood’s often pandering offerings that undermine general audience intelligence. But when the play’s characters then qualify one of these movies as good or bad, it’s unclear if the character has crap taste or if it’s just hard to make a movie trailer that looks legit and professional for a low-budget theatre festival.

No doubt, Sweeter Dreams is an ambitious endeavor with its hefty inclusion of multimedia and attempt to take on Hollywood from every angle. Pflaster’s script is well-written, nicely structured, and full of witty dialogue. Hopefully this show will get the opportunity for a more nuanced production in the future.