By Tennessee Williams; Directed by Cyndy A. Marion 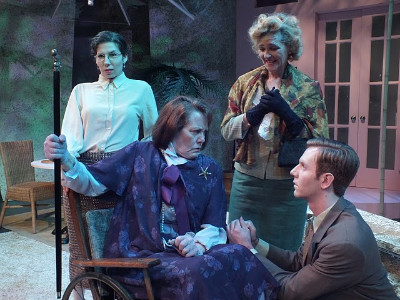 Most people are familiar with Williams as the author of such modern masterpieces as The Glass Menagerie and A Streetcar Named Desire. Fewer are familiar with some of his later, less conventional works like Suddenly Last Summer. After helping to define modern realism, Williams moved beyond it and began to write plays rich in symbolism and meaning, but replacing the natural with a stylized world. Such is the case with Suddenly Last Summer, Williams’s psychoanalysis-influenced “moral fable.”

Marion brings the designers and casts together to create that specific world. White Horse’s production includes an elaborate and somehow grand set by John C. Scheffler, delicious costumes by David B. Thompson, rich lighting by Debra Leigh Siegel, a lush soundscape by composer Joe Gianono and sound designer Colin Whitely. The soundscape provides a vibrant, effective underscoring for the action and dialogue, I only wish there were more of it because it added so much meat. And like many Williams shows, the lighting ties this production together, “illuminating” plot and meaning then culminating in a brilliant, illusion-shattering final effect.

This is a strong showing of an excellent play if audiences are open to it. As an audience member, it’s important to know that you are seeing an expressive play. You’ll get more out of the performance if you accept what you are being given whether or not it’s expected.

Last summer, Sebastian died. At the opening of the play, Elizabeth Bove gives a marathon performance as the speeching Mrs. Venable, Sebastian's bereft, vindictive, and cultured mother. Today is the day she finally confronts the person who was there when Sebastian died: Catharine, an iconic role played by Lacy J. Dunn. Catharine has a fantastical story to recount, but it could have great consequences for the finances of her mother (Lue McWilliams) and brother (Haas Regen), the medical research of Dr. Cukrowicz (Douglas Taurel), and Catharine’s own future. This afternoon of family drama and peering through windows is facilitated by Mrs. Venable’s assistant (Heather Lee Rogers) and Catharine’s nun caretaker (Carol Ann Foley).

Full of the rich language and florid imagery, Suddenly Last Summer brings intrigue, loss, and need into a humid New Orleans garden for a dangerous afternoon tete-a-tete. White Horse Theatre Company enriches this sultry classic with lavish design and emotional performances. This is a production of the play worth seeing.

(Suddenly Last Summer plays through October 2, 2011 at the Hudson Guild Theatre, 441 West 26th Street between 9th and 10th Avenue. Performances are Tuesdays through Saturdays at 8PM, Sundays at 3PM. Tickets are $18 and can be purchased at www.smarttix.com, 212-868-4444. For more information visit www.whitehorsetheatre.com.)