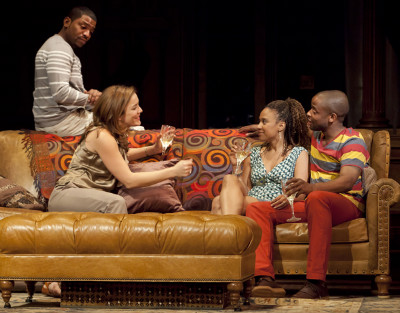 BOTTOM LINE: Stick Fly is a messy play with a great cast, whose performances underscore just how much we’re missing when actors of color aren’t given the opportunities they deserve.

This season, New York has seen a number of new plays about wealthy families whose money can’t help them resolve their conflicts. In The Lyons (The Vineyard), Other Desert Cities (Lincoln Center), and We Live Here (Manhattan Theatre Club), we have watched parents, children, siblings, and significant others trying (and largely failing) to work out their issues; someone on stage is usually a writer, or musician, or painter, which either annoys the more practical members of the clan, or sets them aflame with envy. Stick Fly, the Broadway debut of playwright Lydia R. Diamond, also falls into this genre; however, her battling brood just happens to be African-American. Does that really make a difference? Of course it does. It doesn’t make the play great, but it does make it unique.

Stick Fly brings the LeVay family together at their vacation house on Martha’s Vineyard for a weekend everyone expects to be tense — both sons are bringing their lovers home to meet the parents. One brother has followed in his father’s footsteps becoming a doctor, however, he knows that his mother will not be happy to see his white girlfriend. The younger son has already disappointed his parents several times by bouncing from career to career, but he seems ready to settle down with a smart, accomplished (black) woman who encourages his newfound identity as a novelist.

Both young men are prepared for difficulties, but they don’t know the half of it. Their mother is mysteriously absent. The girlfriends immediately clash. And their longtime maid is too ill to come up to the house, instead sending her teenage daughter, who has grown up around this privileged black family without entirely being a part of it.

The cast of Stick Fly brings together actors from stage and screen, many of whom, because of the chronic dearth of roles for people of color, are not as familiar to mainstream audiences as they should be. As Dr. Joe LeVay, the demanding family patriarch, Tony-winner Ruben Santiago-Hudson proves (again) he’s one of our finest stage actors of any ethnicity. Mekhi Phifer (Clockers, E.R.) makes his Broadway debut as the elder son, Harold (nicknamed “Flip”), who has molded himself in his dad’s alpha-male image. Dulé Hill (The West Wing, Psych) plays the less secure, more sensitive Kent (called “Spoon” by his loving fiancée).

However, as much as Stick Fly deals with the question of what it means to be a man — is it about prestige? Money? Sex? Fatherhood? — it’s the women on stage who give the play a much-needed (pardon the pun) buzz. Connected only through the men they love, they battle, both outwardly and indirectly, over issues of race, class, and family. Taylor (played by the Tony-worthy Tracie Thoms) resents feeling as if the WASP-y Kimber (Rosie Benton) “belongs” at the LeVay home more than she does; she is intimidated by her future-in-laws’ wealth, while her white counterpart takes it in stride. Cheryl, the maid’s daughter (Condola Rashad), dislikes both girlfriends, but especially Kimber, whom she sees as a rival for Flip’s affections. Caught between these two unfriendly women, Kimber has to find a way to keep her cool or else be accused of being racist, patronizing, and/or a snob.

Directed by Kenny Leon (who also staged The Mountaintop, playing three blocks down), Stick Fly brings issues that are all too familiar to audiences of color, but possibly not to their white friends and neighbors, to the commercial theater: for example, Kimber is baffled when Flip, Spoon and Taylor reminisce about the “Jack and Jill” club, an organization that symbolizes class stratification within the African-American community. It’s also refreshing to see black characters on stage outside of the context of civil rights and economic struggle. The LeVays bear little resemblance to the Younger family of A Raisin in the Sun or the Maxons of Fences (both plays which Leon has directed on Broadway). There’s a lot of plot here — aside from the conflicts mentioned above, there’s also a huge family secret and a smaller sexual one revealed during the 2 ½-hour running time. Playwright Diamond’s background is in less conventional dramas, and it shows; some of her dialogue sounds more like speech-making than human conversation, and the resolution is a bit too much like that of a TV movie.

The performances of Thoms, Rashad (who garnered copious praise for her work in 2009’s Ruined) and Santiago-Hudson elevate what might be, without them, just another play about dysfunctional rich people. The same audiences who flocked to the well-produced but slight We Live Here ought to be lining up to buy tickets to Stick Fly. If they don’t, it won’t be a theatrical tragedy, but it will be more evidence that, like the LeVays, people — and stories — of color have to be twice as good to get half as far.

(Stick Fly plays at the Cort Theatre, 138 West 48th Street between 6th and 7th Avenues. Performances are Mondays, Tuesdays and Thursdays at 7PM; Fridays at 8PM; Saturdays at 2PM and 8PM; and Sundays at 3PM and 7:30PM. Tickets are $65-$252 and are available at telecharge.com or by calling 212.239.6200. For more show info visit stickflybroadway.com.)