Off Off Broadway, Play Revival
Runs through 12.17.11
Sargent Theater at the American Theater of Actors, 314 West 54th Street, 4th Floor 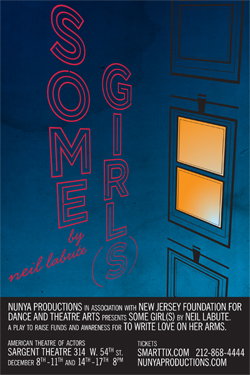 BOTTOM LINE: A for-charity production of Neil LaBute's play about a man talking to his ex-girlfriends.

Neil LaBute’s Some Girl(s) tells the story of a man who decides to re-connect with a handful of ex-girlfriends before he gets married. He travels to Seattle, Chicago, Boston, Los Angeles and Seattle (again) to do so and, consequently, the play consists of five scenes that take place in five different hotel rooms.

The main character is called only “Guy,” a name-title that, as the story progresses, takes on the meaning that he is a kind of everyman (or, more specifically, straight white man). Guy (Michael Scott King) is perhaps well-intentioned at the most basic level, but he is also flawed with a sense of entitlement and emotional detachment that prevents him from really understanding any of the women he has shared a part of his life with. Each woman is like an object he has once possessed and now he is puzzled, perhaps wishing to know that, if he chose to, he could possess each one again. King maintains a consistent character throughout and never fully villainizes himself as he walks the line between genuine attempts at reconciliation and manipulations of the women’s emotions and sexuality. King is geeky, cute and superficially harmless, but shows that even the “nice guy” can cause irreparable damage to the women who want him.

Guy’s women, his ghosts of relationships past, run the gamut of modern female archetypes, but all seem to be simultaneously open to and angry with him. The first, Sam (Rebecca De Ornelas), is Guy’s sweet and smiley high school girlfriend who has moved on to a domestic life of marriage and children, something she had imagined she would have with Guy. Tyler (Betty Kaplan) is an artistic and independent woman whose relationship with Guy was primarily sexual. Lindsay (Jody Lyn Flynn) is a professional and intellectual woman who feels confusingly bitter because she thinks Guy left her because she is older than him, which is complicated by the risks she took to be with him. Bobbi (Robin Singer) is an easy-going and pretty California girl who suspects that Guy was interested in her identical twin sister. The final scene (which is a new addition since the play’s last New York production) is with Reggie (Mariya King), the younger sister of Guy’s best friend from high school.

Some Girl(s) originally ran at the Lucille Lortel Theater in 2006 and was received with mixed reviews. Indeed, any play comprised of five consecutive conversations about past relationships can be tedious for some audiences and there is a certain emotional stamina expected by the play. For those willing and able to invest in such a story, this production pays off as it oscillates between sardonic humor and often-painful drama.

This type of play is also quite demanding on the performers, who have to sustain long, dialogue-heavy and emotionally complex scenes. The cast, overall, succeeds in this. Much like Guy, we as audience members tend to compare the women to each other, as they appear in consecutive acts with identical formats. For me, Flynn gave the most successful performance as Lindsay, who bares her blazing brain along with her emotional vulnerability, both of which Flynn ignites with her energetic acting. Flynn also looks the part perfectly, with teased-and-slicked business woman hair, alert eyes and a skirt that shows her sexy but aging tanned legs.

Design-wise, this production operates well on a clearly small budget. The rotation of hotel rooms is executed cleverly, with the female actors rearranging a small collection of furniture and switching out the wall hangings while dressed as hotel maids between scenes. The costumes range from realistic and hip (Reggie) to “who would really wear that?” (Sam), but are never too distracting.

For those who enjoy watching characters digging deep, this play is a good choice. LaBute’s script effectively explores the complex web that people, and especially men and women, must navigate in relationships with each other, and how cultural concepts like “manhood” can be disabling more than anything else. Guy is ultimately a pathetic person, especially when he waves around the word "marriage" as if it is a cure-all for all the wrongs of his past. Ironically, this only raises worry in the audience, who know that all of the action in the play is also a series of deceptions against his fiancee.

Another good reason to see this production of Some Girl(s) is that it’s for charity. Nunya Productions donates proceeds from their plays to a charity and, in this case, their profits will go to To Write Love on Her Arms, which helps people with depression and related difficulties -- people like Guy's girls.

(Some Girl(s) plays at Sargent Theater at the American Theater of Actors, 314 West 54th Street, 4th Floor, through December 17, 2011. Performances are Wednesdays through Sundays at 8PM. Tickets are $30 (with the option to donate more to To Write Love on Her Arms) and can be purchased at smarttix.com or by calling 212.868.444. For more show information visit nunyaproductions.com.)