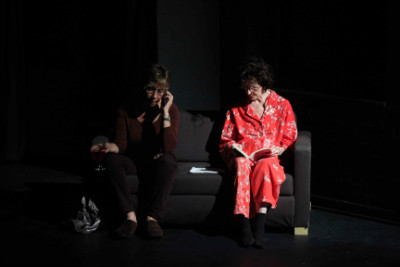 BOTTOM LINE: A family drama that was developed using an innovative actor-based technique. The characters are strong, but the dialogue is stale.

Scotch Kiss is the latest show at The Seeing Place, a three-year-old ensemble theater company that strives to develop its shows as a group process. Scotch Kiss is an ambitious example of this, created through a series of scene workshops in which the actors improvise in order to better realize the depths of each character. In my understanding, the process of putting on a play is essentially reversed and the concrete dialogue that we see on the stage is one of the last elements to come into rehearsals.

Based on “true events,” Scotch Kiss follows the 80-something Scottish immigrant Adelaide “Addie” Turner (Mary Anisi) as she strives to create a life independent of her husband, William (Michael Stephen Clay), after 60 years of marriage. In the first scene, Addie’s son Dan (Ned Baker Lynch) and his new girlfriend Nancy (Amanda Baker) help her escape from her Brooklyn home while William is out grocery shopping, then drop her off to stay with her daughter Cora (Debbie Friedlander), a mother of two with a dependency on pink wine. What follows is a series of scenes in which the members of the family play their fated roles as they navigate a new situation. The plot almost constantly highlights the tug-of-war between dysfunction and love that is so common in family dynamics.

Scotch Kiss packs a heavy load of emotional intensity as the members of the Turner family wrestle each other's morals and worry about money. Stubbornness prevails and the process of Addie and William’s divorce, the main thread of the plot, is messy and disheartening; we realize that the divorce will likely leave everyone involved rather dissatisfied, rather than bring about a sense of freedom or freshness.

One of the goals of The Seeing Place Theater is to put on shows that are affordable and, therefore, accessible to a wide-range audience. At $10 per ticket, this goal is certainly met and, as to be expected, there are some elements of the show that reflect the concept that “you get what you pay for.” The show’s design is minimal and the theater’s old (probably salvaged) seats creak and moan throughout the show. This kind of thing doesn’t bother me and, in fact, I am usually charmed by the grungy, threadbare theaters that put on some of New York’s cheapest (and often most interesting) shows. On opening night, there were also some rough elements (missed sound cues, a lot of distracting sounds coming from the tech booth) that will probably be smoothed out early in the show’s run.

What did bother me (and keep in mind that I'm a writerly type, who pays a lot of attention to the language of plays) was the dialogue, which seemed tired and unrealistic. Part of this has to do with the words themselves, which often rely on cliches and stock phrases that a real person would be unlikely to use in such profusion. Many of the conversations also repeat themselves and -- though having the same argument over and over is often the sad reality of dysfunctional families -- this doesn’t necessarily belong in the theater where the a play’s success is inevitably intwined with the audience’s attention span.

At least on opening night, the staleness was also palpable in the delivery, as the dialogue had an odd, unnatural pacing. Combined with the peppering of generic phrases, this damaged the play's believability. Since this effect was present across the board, I don’t think that it was indicative of a major deficiency on the part of the actors. Instead, I suspect this may be the sacrifice of developing a show without inserting the dialogue until the very end. While each character felt dynamic and round, the words coming out of their mouths didn’t and it seems likely that the actors just haven’t had enough time to find their proper verbal stride.

At $10 per ticket, it only seems fair to forgive some of the shortcomings of the show -- particularly of a show that is taking risks in favor of innovation. Scotch Kiss may very well get better throughout the run and, as is, it has enough emotional leverage to tug away at many people’s heart strings. If you don’t mind (or even really like) soapy dialogue or if you want to see a show and have a strict budget, consider Scotch Kiss. If nothing else, you’ll be supporting a theater company with “for-the-people” principals. You’ll be supporting a theater company that deserves it.

(Scotch Kiss plays at The Seeing Place at ATA's Sargent Theater, 314 West 54th Street, 4th Floor, through October 9, 2011. Performances are Saturdays and Sundays at 2PM, Mondays and Tuesdays at 8PM. Tickets are $10 and are available at smarttix.com or by calling 212.868.4444. For more show information visit seeingplacetheater.com.)