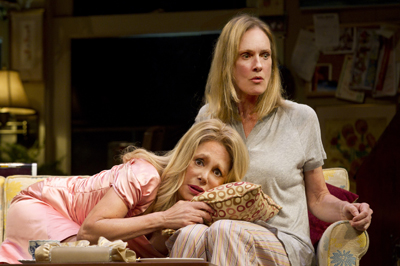 Marlo Thomas and Lisa Emery in GEORGE IS DEAD by Elaine May, part of RELATIVELY SPEAKING. Photo by Joan Marcus.

BOTTOM LINE: Three one-act comedies that are all enjoyable but unlikely to stay with you for long.

Relatively Speaking brings together three champions of comedic writing -- Elaine May, Woody Allen, and Ethan Coen -- presenting three separate one-act plays all directed by the venerable John Turturro (in his Broadway directorial debut). The commonality is family, and though the plays are all very different, they each deal with kin in some way.

A large and energetic cast keeps the production moving along, and pauses between the plays (including one full intermission) put a hard stop to the action so the audience can regroup for the next play. If you often find yourself bored and distracted at two hour-long theatrical events, this format might be a welcomed change -- with each play clocking in under 45 minutes, there’s not much time for lagging.

But the flip side is this: a short one-act comedy doesn’t allow very much time for character development or a fundamental rooting of the story, and the result becomes something more of a prolonged sketch. Not that there’s anything wrong with that. Just don’t expect significant substance from any of these plays.

Relatively Speaking opens with Ethan Coen’s Talking Cure, about a mental patient (Danny Hoch) in conversation with his psychiatrist (Jason Kravits). The patient attempts to play some mind games but really just presents himself as believably nuts. A glimpse into his parents’ relationship while he was in utero provides the cause for his behavior. The shortest of the three plays, it’s also the most irreverent.

Elaine May’s play George Is Dead follows, about a self-obsessed, affluent woman named Doreen (Marlo Thomas) figuring out what to do after her husband dies. With no one else to turn to, she drops by the doorstep of her nanny’s daughter (Lisa Emery) and makes herself at home. Thomas’s performance of her infantilized character is wildly exaggerated but silly enough to be quite funny. Emery provides the most fully realized character of the evening, and the only one I sympathized with -- as she obligingly scrapes the salt off of Doreen's crackers, we see her own tragic reality slide further down.

The final play is Woody Allen’s Honeymoon Hotel, which is exactly what you would expect from a Woody Allen one-act. Though he has written for the stage before, his previous work is often much denser than this comedic charade. Full disclosure, the audience was roaring with laughter -- I’m not sure if they were actually that delighted or merely justifying the ticket price, but regardless, people seemed pleased. I, on the other hand, was mostly just offended. In true Allen fashion, a young bombshell (Ari Graynor) falls for an older man (Steve Guttenberg), in this case, leaving her groom at the alter to run away with his father. As both sides of the aisle assemble in the honeymoon suite to figure out what’s happening, there are ample one-liners, some business with a pizza, and a Rabbi doing funny things that Rabbis do.  Although there are some entertaining moments, the misogyny at the heart of this vapid story grated on me through its end. There is nothing sympathetic or endearing about privileged old white men getting in the pants of someone half their age. When everyone is gross and amoral, what is there to care about?

(Relatively Speaking plays at the Brooks Atkinson Theatre, 256 West 47th Street, in an open-ended run. Performances are Tuesdays at 8PM; Wednesdays at 2PM and 8PM; Thursdays and Fridays at 8PM; Saturdays at 2PM and 8PM; and Sundays at 3PM. Tickets are $75-$130 and can be purchased at ticketmaster.com or by calling 800.745.3000. For show information visit relativelyspeakingbroadway.com.)