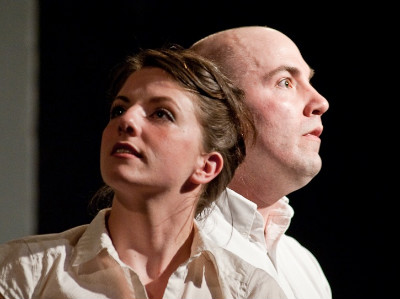 BOTTOM LINE: Writer-performer Clay McLeod Chapman once again brings his dark, humorous and unique sensibility to the stage in this bare bones production.

Back in the summer of 2001, right before New York and the world were changed suddenly and forever, I was a volunteer at the New York International Fringe Festival. In exchange for my labor, I was offered free tickets to some of the many, many shows, and found myself sitting in a very small black box space called UNDER St. Marks, watching The Pumpkin Pie Show. No set, no props, and only one actor: Clay McLeod Chapman, also the playwright. He was supported by a small group of musicians. Theatre is hard enough when you've got a huge team doing it with you, but Chapman was out there almost alone and, metaphorically speaking, nearly naked. His performance -- a series of monologues in which lonely, frightened, and/or perverse characters testify to their pain or confess their misdeeds -- struck me as original, disturbing, and hilarious. I made a mental note to keep an eye on Mr. Chapman in the future.

A decade and several earth-shattering events later, The Pumpkin Pie Show is still bringing you funny, scary stories written by Chapman and performed by him and a talented team of usual suspects. Over the years, the shows have run the gamut in terms of size and complexity, at one point even expanding to include an entire marching band. However, for this October's installment (just in time for Halloween), we're back to basics: Chapman and frequent collaborator Hanna Cheek, clad in white and khaki on a bare stage with only a handful of props. Kyle Jarrow (an Obie-winner for A Very Merry Unauthorized Children's Scientology Pageant) is also on hand with his band, Sky-Pony. The show's title, Lovey Dovey, is provided by one of Jarrow's lyrics: "We've all said that lovey dovey bullshit." The sentiment is dark, but it's delivered with a wink. This is vintage Pumpkin Pie.

When you enter the space -- UNDER St. Marks once again -- you will be greeted by Chapman, Cheek and Jarrow with handshakes, smiles, even hugs. You will be offered the opportunity to purchase beverages or mini-pumpkin pies, home-made by Jarrow's wife and bandmate, Lauren Worsham. The cast will even help you find a seat and bring out more chairs if needed. Then the fun will begin. The players may be friendly, but the show is not for kids or the easily weirded-out. Chapman, not necessarily a genius actor but a riveting stage presence nonetheless, will start things off with a story about the science and magic of making out at a middle-school dance. Cheek will take over with an autobiographical tale of how a movie directed by her dad has really made her sex life interesting. The second half of the show goes darker, with Chapman assuming the voice of a man unhealthily preoccupied with the teenage girl next door and Cheek embodying an elderly widow whose health and worldview have taken a serious, unexpected blow. Sky-Pony punctuate the action with infectious songs of mad, sad, twisted romance.

The Pumpkin Pie Show: Lovey Dovey is an informal affair -- Chapman does warmups within full view of the audience, and the band feels free to laugh openly at the show's more humorous moments -- but that should not be taken for a lack of professionalism. On the contrary, everyone involved is a major talent, and each brings his or her A-game to the stage. In the canon of Pumpkin Pie Shows, Lovey Dovey feels relatively minor, more like a Comedy of Errors than a Twelfth Night. But even a less ambitious project from Chapman is still a good night at the theatre. Expect to laugh out loud, feel an occasional chill down your spine, and leave wanting more pie.

(The Pumpkin Pie Show: Lovey Dovey plays at UNDER St. Marks, 94 St. Marks Place between 1st Avenue and Avenue A, through October 29, 2011. Performances are Thursdays through Saturdays at 8PM. Tickets are $18 ($15 for students and seniors) and are available at horseTRADE.info or by calling Smarttix at 212.868.4444.)