Ticket are $18 and can be purchased at www.planetconnections.org. 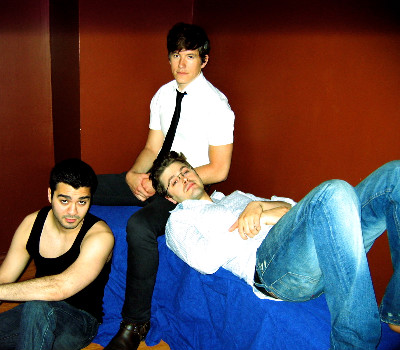 BOTTOM LINE: The Other Day tells the story of a negative gay man recovering from drug addiction and his turbulent relationship with the fella he met in NA.

The Other Day is an episodic look into one man’s journey to move past the past through the arc of his relationship with his boyfriend. Playwright Mark Jason Williams explores addiction, betrayal, emotional abuse, and grief, and how to know when to move on from these things. Under Valentina Fratti’s direction and with the help of sets by Jasmine Vogue Pai and lighting by Yuriy Nayer, we follow the characters from New York and Jersey City all the way to Amsterdam and finally to release.

We begin this journey when Mark (Lars D. Drew) is trying to get away from a drug addiction. He meets Santo (Amadeo Fusca) at an NA meeting, and at first it’s bliss, but as problems arise, Mark must face the question of when to get away from Santo. Simultaneously his best friend Dina (Elena Zazanis) also must decide about leaving her dysfunctional marriage. A trip to Amsterdam and a chance meeting with the very charming Steven (played by the dreamy Zach Wegner) and a prostitute in the Red Light District give Mark and Dina the perspective they have needed to let go.

Partial proceeds from The Other Day benefit the Hetrick-Martin Institute, home of the Harvey Milk School.

(The Other Day runs through June 22, 2011 at the Robert Moss Theatre, 440 Lafayette Avenue below Astor Place. Tickets are $18 and can be purchased at www.planetconnections.org.)