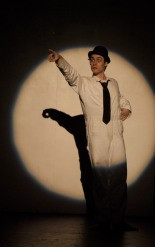 BOTTOM LINE: A daringly experimental, multimedia pastiche about the rise and fall of America in the Atomic Age, easily well worth the price of admission.

The bloom is off the rose in our relationship with the Atomic Age in Nuclear Love Affair. In this highly visual and experimental performance, American icons are juxtaposed against the backdrop of war and persecution that is the legacy of the atomic age. It’s this contrast that gives the play its weight. Beloved icons are mutated by the ravages of atomic radiation. A cross dressing Marilyn Monroe teaches the audience to duck and cover, Elvis becomes a traumatized soldier raping Vietnamese villagers. Lucille Ball becomes an electrified Ethel Rosenberg, the Weather Underground lays siege to Washington D.C. There are many comedic moments, but they only serves to highlight some of America’s darkest hours.

Nuclear Love Affair opens with one part Julia Childs, one part 50’s era product spokeswoman delivering instructions on how to bake an Atomic Victory Cake. From there the play spins out into a series a vignettes that are revisited as disconnected story lines. Borrowing the play’s central metaphor, Nuclear Love Affair is akin to beating cake batter with an electric hand mixer. There is a violent energy that keeps threatening to lose control, sending characters, timeline, and plot flying as gobs of batter. If you are looking for a traditional, straightforward story, you will not find it here. At times it can be a little disorienting as vignettes spin past you. There is something appropriate about it though, because the turbulence of these decades between 1940 and 1969, surely feel out of control looking back. It would help the audience to know something of the history of this period. Scenes fly by quickly sometimes and there is little overt reference to some of history’s intricacies and antecedents. However the multimedia production makes excellent use of old film and television reels and audio clips.

There is not much in the way of a set, except for two projection screens that balance the space in a dynamic way. The rest of the stage is bare to allow the actors to physically own the space. Nuclear Love Affair’s production makes use of an ensemble cast, with minimal dialogue. There are announcer-like voiceovers, which frees the cast to dance and tumble with some very compelling choreography. The play is at its best in this experimental form, when speech is a little too didactic to be realistic. Having said that, one of the most powerful scenes is highly dialogue-driven and illuminates some of the weakness of other dialogue through the play. In it, Julius and Ethel Rosenberg recreate a scene from the I Love Lucy Show, which is projected onto the screen earlier in the production. Ethel struggles to deliver her last letter before she is executed for treason to chilling effect.

From the classic Duck and Cover public service announcements, Nuclear Love Affair jumps to a boxing match between the USA and USSR to win the affection of Cuba. It flings itself at Vietnam, as napalm sends fireworks in the background to music and hip gyrations of Elvis. Charlie Chaplin’s face melts under the searing heat of Hiroshima. Kitsch, Americana, and haunting moments of stagecraft fill the production. The play finishes its argument with the tragic suicide of Marilyn Monroe, the blond bombshell and icon of America’s failed innocence and a touching final plea.

Nuclear Love Affair traces the journey of the American Dream as it becomes tarnished by the Nuclear Age. It is not a new argument and I feel misses one essential truth: the age of the atom is still upon us. The play hops as far forward as 1969 and seems to paint the age as something come and gone. But the journey is not just a wistful look back, it still continues. This play’s message might be more powerful if it carried it up to modern day events. The atomic age is now. The cold war taken up by Pakistan and India, the yellow cake justification of the Iraq War, Iran’s three card monte routine in its nuclear inspections: it is still happening. The atomic age and the miracle of science is as much a cancer and a blessing as it ever was.

Still, this is an ambitious production that is overall successful. As part of the Dream Up Festival, it really is a shame it has such a short run. I can only hope they manage to mount a second run in the near future. It deserves to be seen.