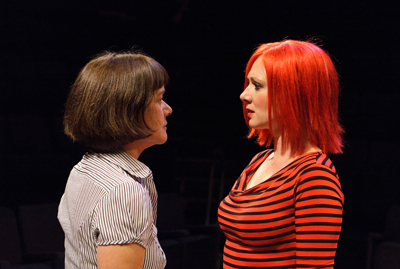 BOTTOM LINE: Alan Ayckbourn’s 75th play, a morality play set in modern day Britain, is intense, thought-provoking and definitely worth seeing, even if not quite up to the level of his usual work.

If it is true that “the road to Hell is paved with good intentions,” then it is more than likely that, on its way there, it must pass through The Blueberry Hill Development, an imaginary dystopia envisioned by Alan Ayckbourn as the setting for his 75th play, Neighbourhood Watch. Produced by the acclaimed Stephen Joseph Theatre of Scarborough, UK, Neighbourhood Watch is currently making its US premiere at Brits Off Broadway at 59E59 Theaters and is the fourth of Ayckbourn’s plays to do so.

The Blueberry Hill Development is a British, middle class, suburban community, overlooking the Councillor Mountjoy Estate which is a lower class community, perhaps even a slum, at the foot of the hill below it. The Mountjoy Estate may be home to any number of thieves and ne’er-do-wells but the denizens of Blueberry Hill are no bargains themselves. Rather, Blueberry Hill appears to house a motley assortment of saints and sinners, victims and victimizers, paranoids, sociopaths, thugs, arsonists, and sexual deviants who, somehow, someway, have managed to hold it all together and maintain a viable community (albeit one suffering from the typical ills of modern suburban living such as petty crime and vandalism). Or at least the residents of Blueberry Hill have managed to hold it all together until the arrival of Martin Massie (Matthew Cottle), a God-fearing messianic Christian and his adoring and equally God-fearing Christian sister, Hilda (Alexandra Mathie).

Shortly after the Massies’ arrival at Blueberry Hill, on the day of their housewarming party, Martin encounters a trespasser on his property, a young man who appears to be making a getaway with goods stolen from the home of Martin’s next door neighbors, Luther Bradley (Phil Cheadle) and his young wife Magda (Amy Loughton). Martin manages to retrieve the goods and returns home to co-host his housewarming party with Hilda, while the youth escapes and continues on his way, presumably to his home in the Councillor Mountjoy Estate.

Upon returning home, Martin meets and greets his neighbors as they arrive for the party: Rod Trusser (Terence Booth), a paranoid personality seemingly obsessed with guns, police and security; Dorothy Doggett (Eileen Battye), a mousy, fearful widow and the neighborhood gossip; Gareth Janner (Richard Derrington), a strange little man, cuckolded by his wife and intrigued by medieval and colonial instruments of punishment and torture devices; Amy (Frances Grey), Gareth’s promiscuous, adulterous and alcoholic wife; and Magda, a music teacher, who arrives alone, without her husband Luther. (Several other residents of the development who we hear about fail to show up and we never actually get to meet them. They include Lee Wrigley and his sons, Dirk and Duggie who are thugs and arsonists, as well as Cissy and Sindy, a lesbian couple, but, although we never actually meet any of them, we do get to feel as if we know them and they come to play significant roles in the story.)

As the party gets underway, talk turns to issues of community safety and security, the desirability of building a protective fence around the development, whether or not residents should acquire guard dogs, and the establishment of a community neighborhood watch group. All reasonable concerns and questions to be sure -- until matters get way out of hand.

Ayckbourn’s morality play goes on to chronicle the history of the devolution of this once rather ordinary suburban community as a consequence of its residents' implementation of these various safety and security concerns, through to its apocalyptic end. And one is left to ponder just how much of the blame for causing that apocalypse should be placed on the paranoid, thuggish and sociopathic members of the community and how much more justifiably might be attributed to the supposedly well-meaning efforts of those good God-fearing Christian folk, Martin and Hilda Massie.

Ayckbourn is a highly talented writer and virtually all of his plays, including this one, are well worth seeing. But having said that, this play does fall a bit short of what one has come to expect of him. It is heavy-handed to a fault -- did he really have to name three of his principal characters Martin, Luther and Magda to get his point across? -- and it is overburdened with excessive convoluted secondary stories of child and spousal abuse, sado-masochism and repressed lesbianism. The play is good but it could have been better.

Ayckbourn not only wrote the play but directs it as well and he does a fine job of that. The entire cast performs more than competently but the true standouts are Alexandra Mathie as Hilda and Matthew Cottle as Martin. They are both superb.