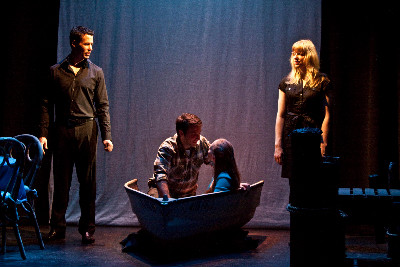 Character development is often easier in the realm of literature than it is on stage or screen, where we are not privy to inner thoughts. Dialogue as the sole relay of language can becomes problematic when books are adapted into other forms -- the language can get lost in the art. Narrators, who can share with us the unseen back stories and inner motivations of characters, sometimes alleviate this problem. In Iron Jaw Company’s Narrator 1, playwright Erin Browne takes on the narrative device, intentionally overusing it to comedic effects. In telling the story of would-be lovers who never quite seem to connect, Browne utilizes two narrators to reveal the thoughts and emotions the duo cannot find the words to express to one another.

The narrative pair, known simply as Narrator 1 (Jennifer Harder) and Narrator 2 (Aiden O’ Shea) serve to illuminate the confusing relationship between Zara (Cotton Wright) and Dan (Marco Formosa), two college friends now in their early thirties, whose friendship seems strained by an unarticulated sexual spark the two seem far too socially maladroit to fully communicate. As both are writers, they tend to over think and over analyze every situation; as a result, they often say the wrong thing at the wrong time or become paralyzed with anxiety. Narrators 1 and 2 give us a glimpse into the overly sensitive stream of concerns darting beneath their deceitfully calm or sometimes defensive exteriors. Also somewhere in this initially confusing narrative mix is a man simply known as Haiku, who delivers haikus during pivotal to scenes to illuminate the unstated emotions of the two characters. When the two meet for an inebriated dinner rife with poorly delivered truths, it is preempted by the emotionally explanatory haiku: “anticipation / at seeing you is very high /now disappointment.”

While Zara is living through her own romantic misadventures, she pens a story with parallels to her own circumstances, a somewhat overly sentimental tale of a blossoming love between a girl who can walk on water and a boy who can talk to animals. Narrators 1 and 2 begin narrating the story of Zara’s fictional characters as well. The story, however, offers little insight into Zara’s troubled psyche other than showing perhaps a fondness for chivalry as her male character seems to spend the entire story rescuing the overly helpless female character from numerous near catastrophes.

Flashbacks of Zara and Dan's dating histories are exposed, explaining why the two never acted upon the simmering sexual tension between them. Narrators 1 and 2 step in to portray their cloying and inconsequential exes, all who seem to possess humorous levels of aplomb. As scenes further unfold the narrators serve to effectively convey the psychological and emotional tension leading to Zara and Noah's long-awaited first kiss.

Narrator 1 succeeds as a well-written, well-acted comedy with a clever, innovative premise. Jennifer Harder and Aiden O’Shea provoke much laughter as the wise cracking narrative duo. Cotton Wright and Marco Formosa are also both likable and believable as a misguided would-be couple. Erin Browne’s script is rife with lyricism and word play usually only seen on the printed page, not the stage.

(Narrator 1 plays at The Lion Theatre at Theatre Row, 410 West 42nd Street between 8th and 9th Avenues, through May 29, 2011. Performances are Wednesdays at 8PM, Thursdays at 8PM, Fridays at 8PM, Saturdays at 8PM and Sundays at 3PM. Tickets are $18 and are available at telecharge.com or by calling 212.239.6200. For more show info visit ironjawcompany.com.)