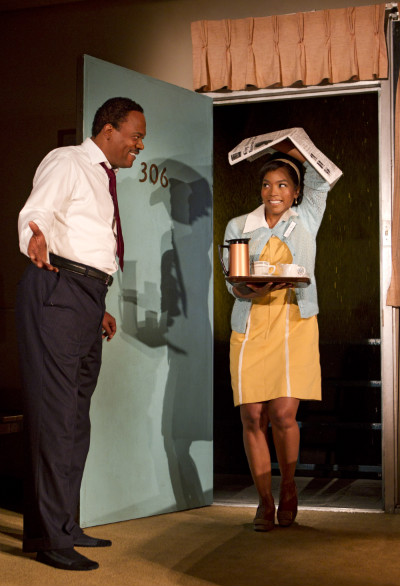 Taking place almost exclusively in a heavily researched rendition of Martin Luther King’s final small, unassuming motel room, The Mountaintop is a reimagining of King’s last night before his assassination on April 4, 1968. As King (Samuel L. Jackson) settles in to his motel he is met by motel maid Camea (Angela Bassett). What begins as an ordinary exchange with a slightly star-struck Camea turns into something more significant as the two reflect on the country's state of affairs and the future of the civil rights movement.

Don’t go to The Mountaintop expecting a historical recreation of King’s last hours. Much liberty has been taken to explore who King may have been in his private life, and considering King’s place in American society was as a near deity himself, seeing him portrayed as a mortal is somewhat unsettling. He curses, notes how horrible his shoes smell, and more than once makes an inappropriate comment or move towards Camea. These details are intentionally offsetting. Although charismatic and commanding, the King played by Jackson is also quite deliberately flawed. He isn’t the orator seen in documentary clips, but instead a normal person with grand ideas and several chinks in his armor, just as susceptible to death as the rest of us. Bassett, as the maid, is a mixed bag. There are times when the foul-mouthed language she uses feels stilted and moments where her over the top manic ramblings are grating rather than endearing. That said, in the last moments of the show, she delivers a fair sized monologue about the state of America that is pitch perfect, somewhere between painfully nostalgic and sensationally inspiring.

As is to be expected with a play about MLK's final hours, there is much speculation about the future of the civil rights movement and general practice of protest, and with that in mind, the timing of The Mountaintop hitting Broadway seems appropriate. Regardless of how you feel about the current political unrest stirring with the Occupy Wall Street movement, The Mountaintop voices a strong hope for the continuation of participatory democracy and protest and it’s difficult not to draw lines between the two.

The Mountaintop isn’t necessarily as riveting a piece of theater as I had hoped it would be. In a ninety minute show, it took about seventy five minutes to get to the point of the plot and another five to get to the emotional heart of the show. That said, Bassett and Jackson are each worth seeing for their whirlwind energy and novel take on their respective characters. The Mountaintop should please those eager to get a look at two big screen superstars in a smaller venue, and those with a significant interest in the civil rights movement curious about a unique angle.