Memory is a Culinary Affair 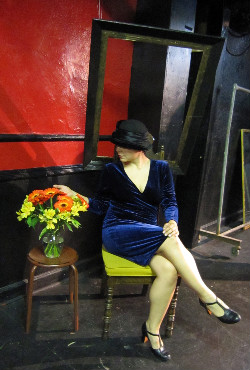 BOTTOM LINE: A charming, appealing work that is able to convey both lighthearted humor as well as heavy-hitting drama.

Memory is a Culinary Affair's title comes from the main character Carina’s (Mariana Parma) realization halfway through the play that her memory of any person or place is tied to food. There’s the upscale restaurant where she ordered ravioli and told her boyfriend she was leaving her home country of Argentina for New York City, the green squash she refused to eat when her mother was taken by members of the Argentinean dictatorship and never seen again, and the buttered croissant her father fed her when they fled the country, leaving their mother behind in imprisonment. Although the play is far less food-focused than one might presume (I was expecting something a little more along the lines of Like Water for Chocolate), Carina uses food and restaurants to recall pivotal moments from her past.

Carina and her American boyfriend Marc (Ben Bucher) prepare for the arrival of her sister Flor (Ydaiber Orozco) from Argentina. As they wait they complain about the heat, eat spoonfuls of melted dulce de leche ice cream (which Carina proudly points out originated in her home country), and wonder about the identity of the mystery boyfriend Flor is bringing with her. In the corner of stage sits the ghost of Carina’s mother Blanca (Michelle Concha) who disappeared in Argentina one night and never returned; she watches her daughter and comments on her beauty. The mysterious boyfriend is soon revealed to be Pablo (Ron Sarcos), the boyfriend Carina abandoned years before her move to New York to launch a new life. This somewhat implausible and very poor decision on Flor’s part leads, as one would expect, to trouble from the second he arrives in Carina’s doorway. Once he and Carina are alone he reveals that he is still in love with her and wants to win her back, revealing that he doesn’t actually much care about Flor. Carina kisses him back and lingers just long enough to show that she still has feelings, but she pushes him away in the end, reminding him that she is now with Marc and he is with her sister.

The central conflict of the plot then shifts from the presence of Pablo as he seems to be swept under the rug. The focus shifts instead to the Flor and Carina's missing mother. As Carina recalls a green squash her mother served her for dinner, we are suddenly taken back in time to see the moment. The kidnappers harass Carina for being Jewish and tell her that the Jews should leave Argentina for Israel as this country is not their home country. Later it is revealed by Flor that their father found a missing brother they never knew about. Apparently Blanca was in the early stages of pregnancy and gave birth while imprisoned. By putting his DNA into the National Bank of Genetic Data, created to locate children lost during the dictatorship, their father was able to locate his missing son.

The strength of the play resides in its likable characters, Flor and Carina, brought fully to life by the talented actors Marina Parma and Ydaiber Orozco. Despite dealing with some serious issues, the play maintains a charming and light-hearted tone that is emphasized further by the musical interludes between each scene. The apparel of the characters is also especially eye catching and stylish, with outfits changing every scene to make the show highly visually appealing. This aspect can be credited to the work of costume and set designer Jose Luis Morales who provides the play with an effective aesthetic tone that evokes Argentinean culture. The authentic accents of the mostly Hispanic cast, along with their occasional use of Spanish, creates an appealing Latin flavor. The play’s storyline, however, lacks a bit of focus and resolution as we never see a conclusion between Pablo and Carina or Flor. The mystery of Blanca could also have been given a stronger focus at the beginning of the work, to give more foreshadowing and make the events that play out later on more powerful. Overall however, Memory is a Culinary Affair is a charming, well-acted play that covers an important and intriguing aspect of history not often seen on stage.