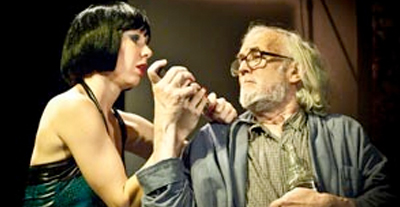 Ned (Anthony Manna) is a young man who lives in an indeterminate location, presumably to avoid the cops. He is an underground computer hacker/gamer, his computer is named Gabrielle (Ali Perlwitz in her very impressive NY debut), and his father (Bob Austin McDonald) suffers from dementia and believes he's the famous blues musician Mangella St. James. Ned furiously attempts to restore his father's memories as they are supposed to be, by way of a complicated drug regimen, pop quizzes with promises of prostitutes if all the answers are correct, and constant viewing of old home movies. When not tending to his father, he exerts control over the terrified internet populace, extorts money from Vietnamese companies and hacks his way around the world. Gabrielle (the computer) is his helper, informant, lover, protector, provider, caregiver and dependent. She guides him in his games, alerts him when he has mail, hides his IP address, and even finds porn for him. Interwoven in all this setup is a mysterious woman, (name of Lilly, played by Hannah Wilson), who inserts herself into the play at various times, and changes the whole story when she shows up as the prostitute Ned hires for his father.

It's obvious that Lilly has some sort of hidden agenda, and when she finally reveals the truth to Ned, the show becomes a push-pull of will; Lilly and Ned fighting against each other, Lilly committing more and more reckless acts in her desperation to get Ned to do what she wants. I won't say any more, reviews are not places to reveal the mysteries/surprises of theatre, but I will say that this central conflict, this prolonged arguement between Lilly and Ned seems to me to be the show's biggest problem.

Everything that was fun and quirky and off-beat and sad about the show takes a backseat to this Lilly plot, and the play grinds to a halt for the better part of act two while we wait for resolution.

Other than my usual distaste for seeing actors shout themselves hoarse, I suppose I don't care so much for Lilly and Ned as characters. Ned is a blank canvas, responding to stimuli around him, and not blessed with motivation or interesting layers. The main focus of his life is to keep his father on his drug regimen in the hopes of having him regain his memory, but I didn't feel enough empathy for him. I never sensed how Ned felt about his father, other than exasperation and annoyance, which in turn only made me exasperated and annoyed with him. Lilly, a mysterious figure by design, has little in the way of real warmth or charm, and when she begins wreaking havoc in an effort to achieve her goals, I disliked her all the more. When the conflict resolves, I had to forcibly remind myself to be invested in the conclusion (Caveat: I saw the show early in previews. Perhaps it's changed?)

The actors give as much as they can, and director Joe Jung does everything and anything possible to guide us through. I think it's a very basic script flaw. The writing for the two leads seems bereft of character. Hannah Wilson, as Lilly, exhudes a sort of brittle strength and violent desperation while Anthony Manna, as Ned, is sufficiently frightened and bravado-less. The two work hard, trying to make it powerful, trying to make it mean something, but the text doesn't support such a monumental effort.

It's a shame because there's much about the show that's amazing. Director Joe Jung, the production team, and the the actors embrace the impish, sexualized relationship Ned has with Gabrielle (his computer) and I think everyone who goes to see it will not only be delighted but also slightly uncomfortable by the somewhat universal truths onstage. The writing, when not focused on Ned and Lilly's second act elephantine grudge match, is delicious in its audacity and humor. Playwright Ken Ferrigni does some excellent, imaginative work with the tertiary characters and relationships in this play. I wonder as to the importance/neccessity of the father character, as he doesn't figure into the overall plot too much, but the device of his dementia and subsequent Mangella St. James character gives the show quite a few laughs and some excellent transition music. I'd also like to devote a few words to the awesome Ali Perlwitz, who blew me away with her portrayal of Gabrielle. Both real and un-real, vulnerable and strong, parental and childlike, and hilarious to boot (geddit?), she is clearly a phenomenal actor. The show is worth the price of admission for her performance alone.

Overall, I had an excellent time, and giggled a whole lot. Who knows? It might go viral.

(Mangella plays at The Drilling Company, 236 West 78th Street, through October 29, 2011. Performances are Wednesdays through Fridays at 8PM; Saturdays at 2PM and 8PM; and Sundays at 2PM. Tickets are $18. To purchase tickets call 212.868.4444 or visit smarttix.com. For more info visit projecttheatre.org.)