The Lady's Not for Burning

Off Off Broadway, Play Revival
Runs through 6.11.11
Walkerspace, 46 Walker Street 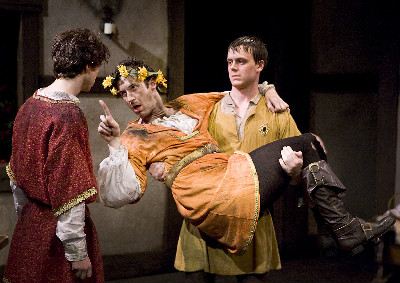 Jared Thompson (left), Matthew Baldiga, and Nick Fesette in The Lady's Not for Burning. Photo by Bella Muccari.

BOTTOM LINE: A poetic 20th century comedy in the tradition of Shakespeare brought back to life in this off off Broadway revival.

If you like Shakespeare, but have seen more productions of A Midsummer Night’s Dream than you care to remember, you may want to head downtown to Walkerspace and check out Parenthesis Theater’s revival of The Lady’s Not for Burning. Christopher Fry, the writer who hit it big with this show in both London and New York in the late 1940s, didn’t exactly strive to recreate Shakespeare’s writing. Why would he? He’d be as likely to succeed at painting his own version of the Mona Lisa. Instead, he smartly wrote his own fresh story that doesn’t hide his admiration for the old Bard.

The Lady’s Not for Burning is set in the middle ages (the program claims “1400, more or less exactly”) and the action is set into motion by three main plots: Nicholas Devize (Jared Thompson) is trying to steal his brother Humphrey’s (Matthew Baldiga) fiance, Alizon (Gwen Ellis); Richard (Isaac Woofter) shows up at the house of Mayor Hebble Tyson (Danny Makali’i Mittermeyer), claims to be the devil and demands to be hanged; and Jennet Jourdemayne (Anna Olivia Moore) also arrives at the mayor’s house, fleeing a mob that is accusing her of witchcraft. The plot is really a web of subplots that work their way through several misunderstandings and changes of heart toward a conclusion that is logical but not predictable.

Like Shakespeare, Fry’s language is poetic and bursting with alliteration, imagery and clever metaphors, some of which develop and extend far beyond expectation (particularly memorable is Jennet’s description of her hopelessly calculating father: "When he was born he gave an algebraic cry; at one glance measured the cubic content of that ivory cone his mother's breast and multiplied his appetite by five.”) The subject matter, too, is essentially Shakespearean, as Fry weaves a web of interconnected characters who are grappling with life and all its big questions (love, death, morality, lawfulness, etc.).

Fry’s already pretty play is made even prettier by the cast and design crew of this production. There is no clear star that outshines the rest and each cast member deserves credit for almost seamlessly delivering Fry’s particularly challenging language -- perhaps even more challenging than Shakespeare’s because it is not so embedded in our cultural consciousness. However, this show should put the name “Jared Thompson” on New York’s theatre radars. From the moment Thompson comes on stage as Nicholas, with mud smeared on his face and clothes and his hair a wild mess, he delivers his performance as the rambunctious and flirtatious younger brother in a way that is both perceptably natural and fun to watch. Although Nicholas is written as one of the less major characters in the play, Thompson’s Nicholas beams with an energy that transforms him into a bigger presence. As a 2010 graduate of the North Carolina School of the Arts and with only one other New York theatre credit (Zephyr Rep’s Romeo and Juliet), Thompson is a promising young actor with Shakespearean leanings.

Michael V. Moore’s set also contributes immensely to the show. The fixed set depicts a main room of the mayor’s timber-framed, tudor-style house. The mayor’s house is believable, if simple, with its hard 15th century furniture, fur pelts and candle sconces with carbon stains above and wax drippings below. The simplicity of the house’s interior allows the true gem of the set to shine: a garden, visible through a large window, perfectly English with its ivy covered stone and blooming roses (that appear to be carefully hand-constructed with paper). Kirche Leigh Zeile’s costumes, too, capture the time and display a similar attention to detail that is rare in off off Broadway shows (mostly because of budget constraints).

Those who struggle with long shows (this one consists of three acts, each nearly an hour long) or with dense dialogue may want to steer clear of this production. However, if you like Shakespeare and wish he had: (a) written a show you haven’t yet seen; (b) lived in the 20th century; and/or (c) ditched the iambic pentameter, then The Lady’s Not for Burning may be just what you’re looking for.

(The Lady’s Not for Burning plays at Walkerspace, 46 Walker Street, through June 11, 2011. Performances are Wednesdays through Saturdays at 8PM; no performance on Wednesday, June 8th. Tickets are $18 and can be purchased by visiting smarttix.com or by calling 212.868.4444. For more show information visit parenthesistheater.com.)